Lorna Dueck and Stephen Lazarus are producers at Context TV.

If Jesus, Martin Luther King Jr. and Mother Teresa were sitting at a table talking U.S. politics, would Donald Trump fit in? Or would he hijack the conversation to persuade them that he is uniquely qualified to "make America great again"?

Last week, in speaking to the largest U.S. Christian school, the evangelically rooted Liberty University in Virginia, Mr. Trump said that should he rule from the White House, he would "protect Christianity." We shuddered at the thought, chagrined as he described the ability "to say Merry Christmas in department stores" as the depth of the "protection" he was promising.

Welcome to the circus that has become religious nationalism and Mr. Trump's attempt to grasp the loyalty of evangelical Christians. Evangelicals are a varied tribe; it's a loose label that includes the hawkish Sarah Palin, who endorsed Mr. Trump last week, and the pacifist Jim Wallis who would not.

Pinning evangelical Christians to a unified opinion is like nailing jelly to the wall, but on Mr. Trump, opinion polls show he is incorrect to boast, as he did at Liberty University, "We've got the evangelicals!" All political candidates are invited to campaign at Liberty and the school says it endorses none, although Liberty's president, Jerry Falwell Jr., gave an effusively supportive introduction of Mr. Trump, reminding us how out of step he may be with other evangelical leadership.

A World magazine monthly survey of evangelical leaders and influencers about their choice of presidential contenders, both Republican and Democrat, has consistently found Mr. Trump losing evangelical support, with 5 per cent or less backing him since the magazine's polling began in July (Republican Marco Rubio, the Florida senator, has been the top choice for seven months running).

Mr. Trump is more popular with grassroots Americans who identify as "born again," a descriptive that Jesus used to describe the inner life, and one that most evangelicals agree on to describe them. A Reuters poll found that 52 per cent of "born again" Christians feel unfavourable toward Mr. Trump, while 60 per cent felt favourable toward rival Ted Cruz and 59 per cent favoured Mr. Rubio.

We will have to wait for the Feb. 1 Iowa caucuses to dissect actual voting patterns, but conventional wisdom seems to be that Mr. Trump is more popular with non-evangelical Republicans than with evangelicals. Johnnie Moore, a faith adviser to Republican contender Ben Carson, told us at Context TV that Mr. Trump is attracting voters because he is coming across as strong, a quality for which Americans have been longing.

Meanwhile, a growing number of U.S. churches have been trying to push politics out of their pews, warned by conclusions nicely summarized in a 2014 article in The Atlantic that divisive politics are a turnoff for many Americans hoping that church would be a place for peace. These are Christians who aspire to be rooted in more than 2,000 years of reflection in what the Bible has to say about justice – and the dangers of human pride cut loose from love for God.

Evangelicals, like other Christians, care about U.S. race problems, the global refugee crisis and the environment. These are faith-based voters who have little time for Mr. Trump's bluster in an age of fear and terrorism. They are more likely to talk about what they call "radical love made visible" than banning Muslims or building a wall to keep out Mexicans.

The U.S. spectacle of religion and politics often seems bizarre to Canadians. Why is that? Religion is much more politicized, partisan and polarized in the United States, a country born in revolution. Canada chose a milder route to nationhood, shaping our distinct political futures amid a fascinating history of shutting down public religious voices when they became divisive, even legislating them, as was the case in the original Broadcasting Act. (See scholar Janet Epp Buckingham's book, Fighting Over God, for more contentious examples.) In Canada, faith stays private, in contrast to American politicians who make stunningly confessional commercials and campaign stops articulating the most personal side of their understandings of God.

Christianity can never accurately be spun as a means to political greatness. Its leader Jesus was someone who gave himself and died willingly, with suffering, to restore people to harmony with God. His followers were then tasked to tell the entire world, in perpetuity, that the way of power is in submission to God. It means that love, forgiveness and justice for all, especially the poor, should mark all our decisions. It's a very challenging tone to put into a presidential race. 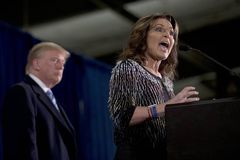