If you don't know who (well, technically, what) Atlas is, you'd best check out this six-foot humanoid robot. He/she/it may be about to steal your job. Its creator, Google-owned Boston Dynamics, just unveiled the latest iteration of the robot that never gives up in a video that had geeks chanting "cool," but looked to many of us like outtakes from a futuristic horror flick.

The robots are not only coming; some of them are already here. Modern auto-assembly plants already "employ" more robots than people. Voice-recognition software is displacing countless call-centre workers in developing countries. U.S. President Barack Obama's 2016 annual economic report to Congress last month contained an even more startling statistic – American jobs paying less than $20 (U.S.) an hour in 2010 face an 83-per-cent median probability of automation, while Americans earning between $20 and $40 face a one-third likelihood of being replaced by a machine in the future.

It's not all bad news. Those whose jobs are complemented by technology, such as software designers, will be even better off. But they are far fewer in number than those whose jobs will be rendered obsolete. Whether out of guilt or entrepreneurship, this has Silicon Valley types musing about the need for a universal basic income, or, as Sam Altman, the president of San Francisco tech incubator Y Combinator describes it, "giving people enough money to live on with no strings attached." His firm is spending "tens of millions" to fund research into the idea.

Tech types like to spin universal basic income (also known as basic-income guarantee, or BIG) as a great liberator that will free human beings from having to work to meet their basic needs, allowing them to devote their brains to higher endeavours that benefit society much more than driving trucks or delivering parcels. Those endeavours could lead to the creation of entire new categories of work. Less sanguine observers see a basic income as a necessity to prevent societal breakdown in the face of mass idleness and declining earnings from work.

When the tech industry gets behind an idea, it tends to have legs. It's no surprise, then, that the idea of moving toward a basic income to replace the battery of welfare and income-support programs that governments now run is suddenly a hot topic almost everywhere. The newly elected Finnish government, facing stubborn unemployment, plans a basic-income pilot project in 2017. Liberal governments in Ottawa and Ontario have started talking about it, too.

The idea excites left-leaning anti-poverty activists, but it also attracts those on the right who want to cut bureaucracy and reduce the disincentive to work embedded in current welfare programs. Indeed, the efficiency argument appears to have persuaded Finland's centre-right coalition government to embrace the idea. The country's Social Democrats traditionally opposed a basic income, arguing that it was too expensive and "did not support Lutheran work ethics."

Cost remains the biggest barrier to a basic income, which, in its purest form, involves giving every adult the same unconditional, tax-free monthly stipend. In Finland's case, the sum often mentioned is €800, or about $1,200, though the government has not settled on an amount. A benefit that big would cost more than the current size of the entire Finnish budget. Even if it was clawed back on high-income earners, the initial outlay would break the bank.

Cost is one reason why Senator Art Eggleton advocates implementing a basic income via a negative income tax, using tax credits to ensure everyone's income surpasses the poverty level. But that would simply add a new administrative layer to what is already a tangled web of welfare programs and tax incentives.

A pure basic income eliminates the need for vast bureaucracies and means-testing. It does not distinguish between people who choose to live frugally on their state stipend and those who pursue goals that being chained to subsistence jobs impede – though the implicit bet is that there are a lot more of the latter than the former.

Slow economic growth and automation may make the move to a basic income inevitable. Some economists suggest central banks should simply print money to fund it, inflation and currency debasement be damned. Indeed, such "helicopter drops" of cash might do what quantitative easing and negative interest rates have failed to accomplish – move flagging Western economies into second gear.

Atlas may have given us no choice.

Opinion
Couillard’s road to ‘yes’ on Energy East just got longer
May 16, 2018 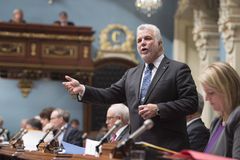