When special friends come for a rare visit, as a good host you want to showcase the shining example of what makes your relationship special, meaningful and important.

The signature trade deal that binds these countries together – the North American Free Trade Agreement – was meant to be that shining example. But in Canada, at least, it appears to be tarnished by skepticism and ambivalence.

Public opinion shows the country's complicated relationship with NAFTA. On the one hand, fewer than 10 per cent would like to see the deal scrapped. On the other, just one-quarter think the pact has been a net benefit to the country in the two decades since it was ratified.

That's not to say that most Canadians think NAFTA has hurt their country. Rather, this is the view of another one-quarter of the population. The rest – roughly half of all Canadians – either think the deal has had no effect either way, or say they aren't sure what the impact has been.

These findings stand in startling contrast to the country's general stance as a pro-trade nation. Most (57 per cent) say trade should be the focus of foreign policy, and Canadians consistently support proposed free-trade agreements in higher numbers than they oppose them (61 per cent supported the Comprehensive Economic and Trade Agreement between Canada and the European Union in 2014, and support for the Trans-Pacific Partnership has outpaced opposition each of the four times the Angus Reid Institute has asked about that deal).

Indeed, when asked whether Canada should be pursuing a closer relationship with the United States and Mexico, large majorities say yes to each. Clearly, the idea of a North American trade agreement is a popular one – though for millions of Canadians, the current execution of that idea leaves much to be desired.

Canadians have been ambivalent about NAFTA since the beginning. In 1993, an Angus Reid poll found that 58 per cent of Canadians opposed the trade deal.

That year, in part because of public wariness of the treaty, the Liberals and Jean Chrétien incorporated renegotiating NAFTA into their campaign platform, only to find upon winning the election that then-U.S. president Bill Clinton had no appetite for reopening discussions on the deal.

Still, the idea of bargaining for new regional trade terms has remained a popular one. Today, when Canadians are asked what should be done with NAFTA over the next few years, the most popular response is "renegotiate it." Fully one in three Canadians would like to see this happen, while about one-fifth say it should be strengthened and expanded.

Age is an opinion driver here: Nearly half of men and women aged 55 or older chose "renegotiate." By contrast, younger Canadians are more likely to express uncertainty. Notably, this follows a similar demographic pattern to the outcome of last Thursday's "Brexit" vote, in which older people voted with a much higher propensity to leave the European Union.

Looking directly south, the conditions for favourable new trade terms aren't exactly there. Both the Democratic and Republican presumptive presidential nominees are rattling protectionist sabres on the trade file. In the meantime, more pressing trade issues than NAFTA loom, such as the soon-to-expire softwood lumber agreement.

What to do to counter these protectionist rumblings? A strengthened Canadian position may lie in more co-operation with Mexico, whose larger diplomatic footprint and diaspora in the U.S. make it much more difficult to ignore than its likeable – but often forgotten – neighbour to the north.

Canadians express a willingness for this country to team up with Mexico in order to stand up to U.S. protectionism, saying, 2 to 1, it's a worthwhile strategy over those who see such a pursuit as pointless.

Will this have any effect on the dynamic when these "Three Amigos" meet? As comfortable as a good host will endeavour to make his guests, it may be time for some pointed conversations.

Opinion
CETA: Canada should seize the historic trade opportunity with the EU
May 30, 2016 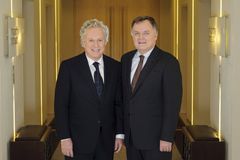 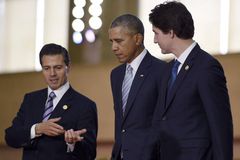