Protesters set up the Occupy Wall Street base camp in New York a month ago because the location epitomizes the economic forces that control the U.S. and global economies. As one sign read: "This is not a recession. It's a robbery." To many, it feels like just that.

The American financial services industry is in desperate need of reform. Many bankers have behaved as secretive corporate titans serving only their own interests, and insist the devastating consequences are not their fault. They are failing to fulfill their obligations to society – in some cases, even to shareholders – and a growing number of critics view the day-to-day behaviour of the financial services industry as unacceptable. If the industry doesn't initiate reform from within, it will eventually have more extreme reform imposed from outside.

In 2008, the routine gambles of Wall Street almost brought down global capitalism and yet, so far, nothing fundamentally has changed. Restoring long-term confidence in the financial services industry requires more than individual banks changing their behaviour or even governments intervening with new rules. The industry needs a new modus operandi, where all of the key players (banks, insurers, investment brokers, rating agencies and regulators) adopt the three facets of collaboration: integrity, transparency and embracing the commons.

Integrity: Trust is the expectation that the other party will act with integrity – be honest, considerate and abide by its commitments. To re-establish trust, the financial services industry needs to have integrity as part of its DNA. But the cavalier manner in which many banking executives violated integrity was stunning. For example, they sold subprime mortgages to people who could never make the payments, bundled them into securities and convinced rating agencies to classify them as AAA, and insurance companies to insure them. They then sold these to unsuspecting investors. They violated all the values of integrity. Everyone in the process suffered, and the global economy was sent into a tailspin.

The 2008 meltdown and the euro crises we face today illustrate how interconnected our world has become. Organizations must be much more aware of what's going on around them. It's important to know the behaviour of others and the potential impact of the actions of distant third parties. If there's anything Wall Street should have learned from the mess it created, it was that business cannot succeed in a world that's failing.

In everything from motivating employees, negotiating with partners, disclosing financial information or explaining the environmental impact of a new factory, companies and other organizations must tell the truth, be considerate of the interests of others, and be willing to be held accountable for delivering against their commitments.

Companies need to act with integrity – not just to secure a healthy business environment but for their own sustainability and competitive advantage. Increasingly, firms that exhibit ethical values and candour have discovered that they can build trust with customers, employees, shareholders and business partners. This makes them more competitive and profitable.

Transparency: One of the reasons companies must have integrity is that they operate in an unprecedented, hyper-transparent world. Customers use the Internet to help evaluate the true worth of products. Employees share formerly secret information about corporate strategy, management and challenges. To collaborate effectively, companies share intimate knowledge with one another. And in a world of instant communications, whistleblowers, inquisitive media and Google, citizens and communities routinely put firms under the microscope. So if corporations are going to be naked – and they really have no choice in the matter – they had better be buff.

But the financial services industry has a history of being opaque and secretive. One Goldman Sachs executive told me off the record: "We're a very private company. The less people know about us and pay attention to us, the better." In commenting on the U.S. government's fraud charges against Goldman, Roger Martin, dean of the Rotman School of Management at the University of Toronto, said: "Sadly for Goldman, transparency is not an attractive option. The better Goldman does in explaining exactly what its business is, the more outraged regulators and the public will be."

If Wall Street had been fully transparent during the past decade, the subprime debacle would not have occurred. In the future, investors, rating agencies and insurance companies should be able to "fly over" and "drill down" into securities such as collateralized debt obligations (CDOs) and analyze the underlying assets. With full data, they could readily assess the payment history and correlate information such as employment histories, property values, location, neighbourhood pricings, delinquency patterns and so on. Potential investors will quickly realize the CDOs' junk status and refuse to buy. Since banks wouldn't be able to offload subprime mortgages, they wouldn't create them in the first place. The industry needs to resolve, immediately, that it understands that sunlight is the best disinfectant.

Embracing the commons: Wall Street reform requires restructuring of the industry. Wall Street companies need to overcome their obsession with proprietary ownership of their intellectual property and learn to share certain information. For example, the banks currently have upward of a trillion dollars of "toxic assets" on their balance sheets. Since no one knows the true value, the assets have created "zombie banks" that won't lend money to entrepreneurs. Because 80 per cent of new jobs come from companies five years old or less, the inability of start-ups to borrow money is a huge impediment to job creation.

How can the banks value these assets, dispose of them and get back to normal? They should be sharing the information – essentially placing risk management in a commons. Think risk management Linux style, which is completely feasible and affordable in a digitized world. For instance, the Open Models Valuation Co. is using the Web to create a global community of experts dedicated to establishing credible valuation and risk assessments for credit securities and contracts such as CDOs and other derivatives.

Craig Heimark, an industry veteran and one of the founders of Open Models, likens it to the scientific peer-review process. "In the scientific world, when people publish something, they don't just publish their results, but also the steps in the process, their methods and assumptions so that they can be vetted by others."

Exposing complex financial instruments to the vetting of thousands of experts could help restore trust in banks, kick-start venture capital, unfreeze the paralysis of lending markets and lay the foundation for a new and stronger financial services industry.

The paramount role of banks is not to create shareholder value and enrich their executives. They exist to provide a safe place for people and organizations to store their money and get credit. They exist to execute myriad transactions, make capital markets and are central to our economy. We charter them with a licence to operate so they can perform these functions, but the recent repeated crises show they have violated their pact with society.

One of the most popular signs in the Occupy movement is "Nationalize the Banks." If Wall Street does not adopt these three principles and change its core modus operandi, it risks having its licence revoked.

Don Tapscott is an adjunct professor at the University of Toronto's Rotman School of Management. He is the author of 14 books, most recently (with Anthony D. Williams) Macrowikinomics: Rebooting Business and the World . 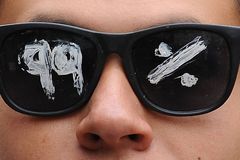 Opinion
Protesters are still the canary in the coal mine
November 11, 2011 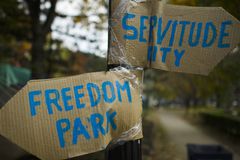 Opinion
Notes from the occupation
October 18, 2011 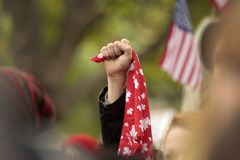