The portrait is too narrow. Thomas Mulcair risks being reduced to stereotype.

There it was again last week, when the New Democratic leader defended himself at a parliamentary committee against misuse of staff. Pens were at the ready for the usual descriptives. Bristling, prickly, short-fused, even if on this occasion they were less evident.

They overwhelm him. His inordinate talent is still recognized – the precision of his mind, his trenchant power of articulation, the depth of his knowledge. And he is by no means falling. The NDP is a force.

But the burning-man caricature is boxing him in. Mr. Mulcair won't get much further unless the image changes, unless the real man becomes manifest.

The mentor was Father Alan Cox, his teacher in Laval, Que., who died six months ago. "He forced us to give back to life," Mr. Muclair once said of him. He was a priest who wore jeans and sweaters and drove an old police car with flashing lights and a radio transmitter. He took the young students on character-building retreats and trips overseas. He took them out of their comfort zone. Don't let the cynics get you down, was the message – change the world.

"He was a very progressive guy, an incredible influence," Mr. Mulcair told me one night over dinner. "He had us out working the poorest parts of town, he got us involved politically, he got us involved in intellectual debate." It may sound maudlin, he said, but he and the group felt a sincere sense of purpose, a responsibility to help the poorest in society. "The high-school group that we formed together, we're still friends."

But if the social conscience, the sense of altruism, is still present in Mr. Mulcair, it doesn't register in the raw political atmosphere of Ottawa. "People don't understand him," said Peter Smoczynski, a documentary filmmaker who attended high school with him. "He comes out of what you might call a grassroots community movement. Cox was a force of nature. His influence is still here."

It wasn't all good. One of Father Cox's class trips to Portugal came to tragedy when a student fell to his death from a hotel window. Mr. Mulcair, 14 at the time, was there.

The tragedy contributed to an extraordinary bonding, Mr. Smoczynski said: "It was like a dead poets' society bond." Mr. Mulcair, with hair below his shoulders back then, was a leader. "The talent was evident. Watching him debate in the roundtables Cox held, he never needed a script. He retained everything and could make the words dance."

The current image of Mr. Mulcair as a prototypical politician with a giant get-ahead ego is wrong, Mr. Smoczynski said. "He has drive and unfettered determination, but it's toward a belief in principle: Life is truth and all else follows."

His admirers point to his leaving the Quebec Liberal government of Jean Charest as an example of principle he learned from another mentor, Claude Ryan. Mr. Charest wanted to turn a big park over to developers. Mr. Mulcair, as environment minister, said no. Offered a diminished cabinet role, he refused again and resigned.

What would he do next? He could have joined another federal party, but he chose the NDP, which, at the time, was nowhere in Quebec. Against overbearing odds, he won a by-election seat in 2007, giving the party a base to work from. The New Democrats won 59 seats in Quebec in the 2011 election.

There is no doubting his strengths, but many wonder whether it's already too late. A new generation is on the horizon and he has that old-school image. Father Cox, who counselled him along the way, is gone. Mr. Mulcair delivered the eulogy. 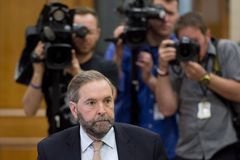 Why the NDP was the landslide winner of Quebec’s election
April 11, 2014