Canada has already entered a period of slower economic growth.

Whether the country passed through a tiny recession or not in the first six months of the year is rather irrelevant. The next six months should be better, but for 2015 growth is likely to be only slightly better than 1 per cent.

What happens precisely thereafter is anybody's guess. But it won't be anything like the palm-tree days of yesteryear with 3-per-cent growth – not with an aging domestic population, a very low oil price, continuing sluggish productivity, offshore outsourcing of manufacturing, commodity prices remaining weak, and natural resource projects ensnarled in aboriginal claims, Supreme Court rulings and environmental opposition.

A while ago, the so-called BRIC countries – Brazil, Russia, India and China – were supposed to drive world growth. Brazil and Russia are going backward and China is slowing down. Only India is showing strong growth, but Canada has a very small trade profile in India. As for the European Union, that economic train keeps sputtering and puttering.

Only the U.S. economy offers an enticing market for Canadian growth, but even the enormous decline in the relative value of the Canadian dollar has not yet driven up exports to the United States.

For a long time, high-priced oil, inflated world commodity prices and rising real-estate prices in a few hot markets kept the Canadian economy afloat. The oil price has collapsed, sending Alberta into a certifiable recession, with big fiscal deficits to come. With that collapse has also come a shrinking dollar and spinoff sluggishness across Canada for industries (and labour) that depended on servicing Alberta's energy industry, especially bitumen oil.

It doesn't matter which party forms the next government, these are the factors that will shape a slower-growth economy. The challenges are much larger, more intractable and, in some cases, beyond Canada's control. These factors are far removed from what we are hearing during the election campaign, where parties are spitting out promises without any clear reckoning, as yet, of how they will be financed.

With slower growth ahead, likely for a sustained period, what can government authorities do? The Bank of Canada has already driven down interest rates, and might do so again in an increasingly desperate attempt to stoke growth.

As for the federal government, only the Liberals suggest that the antidote for what lies ahead is a massive infrastructure investment program totalling about $125-billion over the next decade. Not that the NDP and Conservatives have resisted infrastructure spending. Indeed, the Conservatives showered the country with spending promises in the period before party leader Stephen Harper called the election – everything from transit in Calgary and Toronto, to hockey rinks and wharves and you name it across the country. On July 31 alone, two days before the election, the Conservatives made 109 spending announcements across the country.

The Liberals have trumped their opponents with their stated intention to run deficits and invest even more massively in infrastructure for public transit, clean technology and the vaguely worded "social infrastructure." (Daycare centres and the like, one supposes.)

Such a plan sounds terrific on paper. Party strategists obviously learned from their focus groups that potential Liberal voters liked the sound of such an approach.

What we have learned from this approach, variations of which have been tried before, is that it does create employment and juice up growth. By how much is a matter for debate.

But the approach also runs the following risks: a) by the time the money is spent, the economy has recovered and no longer needs the stimulus; b) projects get hurried along in an attempt to get money out the door and therefore risk running over cost; c) combined with provincial infrastructure plans, federal spending can drive up demand for labour and materials, thereby bidding up project costs; d) political imperatives drive decisions (as seen in the disproportionate number of Conservative projects announced in Conservative ridings); e) a capacity challenge arises for any government trying to manage effectively the massive number projects envisaged by so much spending; f) when so much is being spent on physical infrastructure, governments are forced to curtail spending elsewhere, which usually means severe wage restraint and limited expansion of other government programs, which is what is happening under Ontario Premier Kathleen Wynne, whose economic approach is apparently the template for what the federal Liberals are suggesting.

Opinion
What lasting impression will the Duffy trial leave on voters?
August 29, 2015 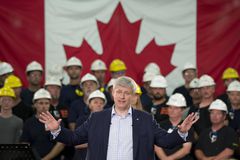 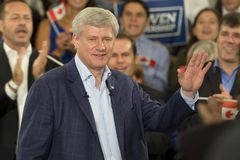 Opinion
Why parties ignore the arithmetic of aging
August 27, 2015