For those interested in the ever-shifting balance between individual liberty and orderly communities, these are fascinating times.

In an operation known as Project Claudia, the Toronto Police raided and charged dozens of marijuana retail outlets last week. The operation was met with an unusually loud outcry. This was clearly not just another drug bust.

Normally, criminal law enforcement action – arrest and prosecution of an alleged offender – rests upon a solid bedrock of community consensus that the misconduct alleged is an affront to community values. For example, when a body turns up riddled with bullets, and an arrest and murder trial follow, there may be great debate about the quality of the police investigation, and whether the person charged is guilty.

But no one debates whether a murder prosecution is itself the right thing to do: The social consensus condemning murder is unquestioned, and unquestionable. It is this bedrock consensus about the need to arrest, charge and prosecute that gives every criminal prosecution its social legitimacy.

The criminal law has a very deep need for this type of social legitimacy since the state is exercising its most consequential power: the power to forcibly deprive people of their liberty. Any denial of liberty that does not rest upon broad social consensus can rapidly unwind our faith in police, courts and the legal order more generally.

At present, there is no longer anything like a bedrock consensus that marijuana is criminal contraband. Legalization was a plank in the Liberals' election platform, and new, transformative legislation is in the works.

So the troubling question about Project Claudia is this: Without any social consensus that marijuana distribution and use is morally deserving of criminal law punishment, why have the police laid criminal charges at all?

Because the truth of the matter is that things are not so simplistically binary. Legalization is coming, but lawmakers quite wisely are not simply tossing the marijuana file in the shredder and walking away, leaving use and distribution entirely to the unrestrained appetites of the most irresponsible consumers, and the unrestrained business acumen of the most unscrupulous marketers.

What limitations on marketing, for example, to children, are in order? What sort of public education about potential adverse consequences should accompany legalization? How, when, where, and to whom can retailers sell? What does a responsible supply chain look like? How can quality assurance – things like product integrity, and consistency of concentration of active ingredients – be responsibly attained?

In other words, legalization is not, and never could be, unconstrained freedom to produce and consume at will. Rather, legalization is a shift from outright criminal prohibition, to a much more nuanced regulatory regime balancing individual consumption choices with attempts to address known and anticipated adverse consequences.

But the free market is nothing if not enthusiastic, and fast acting. So once the pretense of criminal condemnation of marijuana went up in smoke, the vibrant entrepreneurial spirit moved many to rush into a perceived vacuum, eager to gain competitive advantage by setting up shop early and often. It is in this context that Project Claudia can be seen as a loud and clear statement to marijuana industry wannabes and the public at large: "Whoa there, not so fast."

The police used old criminal laws that everyone knows are obsolete. Not ideal, but these were the tools at their disposal, until governments come up with new ones. Police decision-makers faced a choice: sit on their hands doing nothing until the new laws arrive, while an unregulated free-for-all unfolded under their noses. Or take up inappropriately blunt and rusty tools and risk the loudly righteous indignation of the affected, who would inevitably have considerable sympathy on their side.

Project Claudia was therefore bound to be met with howls of disapproval, many of them reasonable. But if it settles a little of the wild-west land-rush atmosphere that is the marijuana trade during this time of legal transition – without too harshly punishing those caught up in the net – then it will have contributed to orderly social evolution around marijuana use.

Pot producers tone down criticisms in wake of store closures
May 28, 2016 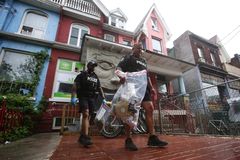 Some pot dispensaries vow to reopen after Toronto police raid
May 27, 2016 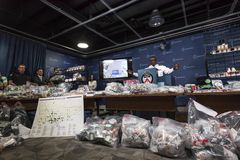 Ottawa is to blame for Canadians’ confusion over marijuana
May 29, 2016