You've got to say this for Toronto's mayor: He's put us on the map. Normally, Toronto gets about as much air time in the U.S. media as the Peruvian anchovy harvest. But these days, everybody who watches late-night TV knows his name.

"I have bad news for you, Canada," Bloomberg's Josh Barro wrote. "Americans have learned about Rob Ford, and we'll have no more of your smug superiority."

Our mayor's risible denial of his (alleged) run-in with crack cocaine has become the stuff of satire. Jon Stewart gave it nearly seven minutes. He opened with hilarious clips of Mr. Ford toppling over on a football field and bashing his face into a television camera at City Hall. "You've gotta wonder … is this dude on crack?" he said.

Jimmy Kimmel ran a fake interview with a fat guy dressed as Crack Man, cavorting with a moose. "These people are pathological liars, eh?" the guy said.

Back in Toronto, reporters chased the mayor through the streets as he refused (yet again) to answer any questions about the infamous crack video, which, according to the Toronto Star, is being shopped around by a Somali drug dealer to anyone who can come up with the six-figure purchase price. (Want to contribute? Google "Crackstarter.") In a brief press conference on Wednesday, the mayor's vastly more articulate brother, Doug, declined to offer any explanation for the alleged video. Instead, he attacked the Star, accused the media of harassing the entire family and swore that he believes his "honest" little brother. "This mayor is fighting for the little guy," he said.

There are three conceivable explanations for the video. The Star made the story up. Or some very clever person fabricated the video and persuaded two top reporters at a leading newspaper that it was for real. Or it's for real. You be the judge.

The Star also ran a photo (not from the video) showing a jolly-looking Mr. Ford during off-hours, in the company of an unknown person and a 21-year-old man who has since been shot dead. No one has questioned its authenticity.

The mayor's dwindling ranks of supporters haven't helped his cause. Commenting on the video the other day, his lawyer said, "How can you indicate what the mayor is actually doing or smoking?" (No denial that it exists, or that the person in it is the mayor.) Deputy mayor Doug Holyday said last week, "we certainly know that drug dealers can't be trusted." (That point, at least, is beyond dispute.) On Wednesday, Mr. Holyday added helpfully that "the lawyers that they are dealing with suggest the less they say at this point, the better."

Legally, Mr. Ford may be in the clear. Police can't arrest someone suspected of drug use on the basis of a video they haven't seen, or even one they have. For the time being, Mr. Ford has obviously decided to tough it out until it all just goes away (as it always has before).

But the long-suffering citizens of Toronto have seen enough. The city can no longer function with someone at the helm who's (allegedly and seemingly) out of control. If he will neither explain himself nor step aside, City Council must repudiate him and appoint an interim leader in his stead. It's the only ethical thing to do. The school whose football team he coaches has at long last given him the boot. City councillors may not be able to take away his job, but they can freeze him out.

The mayor is a hostile, belligerent man with a persecution complex, dubious companions, a history of substance issues and an inclination to shave the truth. During the 2010 mayoral campaign, he denied he'd been arrested in Florida in 1999 for driving under the influence and marijuana possession. Eventually he owned up to the DUI conviction but forgot about the marijuana charge (subsequently dropped), which he was finally forced to acknowledge. In 2006, obviously drunk, he was expelled from a Maple Leafs game after hurling insults at a couple sitting near him. When they complained, he denied he'd been at the game at all. "Someone's trying to do a real hatchet job on me," he groused. He later confessed and said he'd made a "mistake."

Mr. Ford has been surrounded by enablers who have never reined him in. Those days are over. Time to throw him overboard and get on with it.

Why Toronto Mayor Rob Ford was deemed an unfit high school coach
May 22, 2013 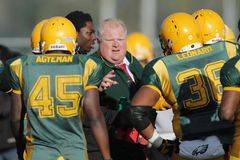 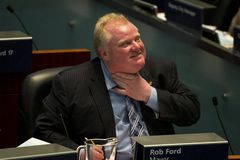 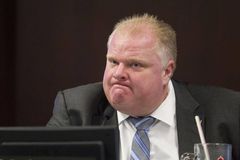