Who would want to hang out under an expressway?

Lots of Torontonians, apparently. The new public space known as the Bentway opened to the public this weekend, under the Gardiner, west of Bathurst Street. And despite the clawing cold, the figure-eight skating rink was packed; the warming stations, in converted shipping containers, were overflowing; the cider was flowing, the DJs even got some people moving their hips.

It was an amazing beginning for a place that is, in many ways, kind of strange: a hybrid of path, recreation area and open-air performance space. Yet according to the Bentway Conservancy, the non-profit that operates the space, roughly 20,000 people came out during the first two days.

There's a lesson here for Toronto: People are hungry for different kinds of public space, and the best way to respond is to get on with building it, fast.

So far, the Bentway is still "a work in progress," as the philanthropist Judy Matthews – who, with her husband, Wilmot Mathews, catalyzed the project with a $25-million donation – told media on Friday. Put more frankly, it's a construction site. A new warming pavilion isn't quite complete; the landscape is only partially finished; the temporary shipping-crate warming stations were just coming off trucks on Friday afternoon. The design, conceived by landscape architects Public Work and urban designer Ken Greenberg, is nowhere near done. One day, it'll be a mix of rough and polished design elements; for now, it's all rough.

And it didn't matter. The ice rink, surrounded by a scattering of public art and a day full of music and dance on Saturday, was enough. "The learning is people have this powerful desire to be outside," Julian Sleath, chief executive of the Bentway Conservancy, said on Monday. "And I suppose the appeal is, who'd have thought you could ice skate under the Gardiner expressway?"

Novelty, a bit of entertainment, and a place to gather outside. When it was first announced in 2015 as Project Under Gardiner, the concept left some locals befuddled: I had more than a few conversations with friends and neighbours who just didn't get it.

Now, we can get a good sense that it works, even in freezing January. The Bentway's programming mix of recreation, live music and DJs, art installations and performance will spin out through the year; an open-air auditorium, just east of Strachan Avenue, is scheduled to open by summer.

So far the Bentway is relying on Fort York Visitors' Centre, itself a gorgeous building and an apt front entrance to one of the most important historic sites in the city. Its lobby was functioning as a makeshift warming space for the Bentway, and there were more people in that building than I've ever seen there. That's a victory for the Fort, and staff were ready to greet them with programing and a "selfie station" with costumes. Small victories, all over.

I couldn't help thinking about the proposed $1.66-billion Rail Deck Park, which the city is now attempting to plan only steps from the $49-million Bentway. (Public Work is working on that project, as well.) At 21 acres, it's a big vision that is not, I expect, going to happen in my lifetime. Toronto has a cheapskate political leadership that won't even fund desperately needed shelter space, never mind big dreams.

But little ones? After one weekend, the Bentway shows we can make those come true. 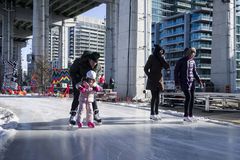