Whenever I write about transgender issues, I get dismayed e-mails from grandparents, other relatives or family friends. They tell me that a child or teenager in the family has declared that he or she identifies as transgender. The parents are determined to do what's right. Now Pete is transitioning to Sue, or vice versa, and the relatives don't know what to do. Something feels terribly wrong to them about all this. But enlightened opinion is all on the other side. The media are on the other side. The experts are on the other side. Not only that, they're told that trans kids are at extremely high risk of suicide, and that if they don't transition they might die.

Now there's help. A new BBC documentary, Transgender Kids: Who Knows Best?, offers a thoughtful and nuanced view of the "gender-affirmative" approach that has swept society. Its focus is on Canada, regarded as one of the most progressive nations in the world for trans rights. Canada is where Ken Zucker, one of the world's leading experts on child and adolescent dysphoria, was fired for not being progressive enough.

The activists believe that children's expressions of gender identity should automatically be taken at face value. Simply put, the children know best. This is now the mainstream view, celebrated in the media, endorsed by progressive politicians, vigorously embraced by our school systems and robustly promoted by a growing number of medical practitioners who do not hesitate to prescribe powerful, life-altering drugs to adolescents and teenagers. Countless parents who would never feed their kid a peanut have now been persuaded to make drastic social and biomedical decisions that will irrevocably alter their child's life.

The BBC documentary carefully airs all sides of the story, and includes interviews with Dr. Zucker and many of the people who oppose him. The CBC, which should have made this program in the first place, ought to buy the rights and air it as soon as possible as a public service. (Failing that, I'm told it's possible to watch it online if you're technically astute.)

Dr. Zucker's approach is a moderate one. Kids' problems can be complicated, he points out, and transition is often not the answer for what ails them. There is no one cause for gender dysphoria. Children don't always know what's best for them, and neither do we. "It takes a long time for a child to know who he really is," he says.

Astonishingly, this common-sense position is now considered unacceptable, even abusive. Many professionals agree in private with Dr. Zucker, says Ray Blanchard, an expert on transsexualism at the University of Toronto. But "they'd be terrified to say that in public," he says in the documentary.

What's shocking about the push to transition kids is that most of the time, the kids grow out of it. By adolescence, the majority – studies average around 80 per cent, according to the documentary – reconcile with their birth gender. Many turn out to be gay. In one follow-up study of 139 boys treated at Dr. Zucker's clinic, 88 per cent eventually "desisted." Not surprisingly, these statistics make trans activists profoundly uncomfortable.

Australian pediatrics professor John Whitehall has also taken a deep dive into this transgender debate. Until recently, he points out, cases of gender dysphoria among children were so rare that many pediatricians never saw a single one. He too zeroes in on Canada, though his comments apply to other countries as well. "What astonishes me is the lack of evidence to support massive medical intervention aimed at 'changing' a child's sex when such procedures are simply not necessary," he writes in the online journal Quadrant. "The enthusiasm of ethics committees in hospitals, health regions and universities for such procedures is an ongoing mystery." He also points out that the links between gender dysphoria, other psychiatric conditions and self-harm are extremely murky.

These two explorations should be required reading for any parent, relative, teacher and politician who cares about our kids. To be clear, I believe that transgender people are entitled to self-determination and the full protection of the law. Some kids really will be better off transitioning. But we have allowed the adults' gender wars to weaponize our children – and that's a terrible thing indeed.

All-gender washroom a big sign of inclusion in these Canadian schools
May 17, 2018 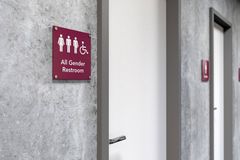 Ottawa behind schedule in redressing past persecution of homosexuals
April 6, 2017
Follow us on Twitter @globedebate Opens in a new window
Report an error Editorial code of conduct
Due to technical reasons, we have temporarily removed commenting from our articles. We hope to have this fixed soon. Thank you for your patience. If you are looking to give feedback on our new site, please send it along to feedback@globeandmail.com. If you want to write a letter to the editor, please forward to letters@globeandmail.com.
Comments