Wade Davis is professor of anthropology, faculty associate at the Liu Institute for Global Issues, and the B.C. Leadership Chair in Cultures and Ecosystems at Risk at the University of British Columbia.

On May 30, two young Canadians, Danielle and Lindsey Petersen, 22 and 23, respectively, reached the summit of Malaysia's highest mountain, Mount Kinabalu. In their exuberance they, and eight other trekkers, stripped off their clothes and frolicked in the sun. Many were shocked to learn that this juvenile gesture of joy resulted in the arrest and detention of the brother and sister in Borneo, along with three of their companions (a police hunt is under way for the five others).

Their backpacking trip had gone terribly wrong, and their situation worsened when Malaysian authorities linked their actions – which were said to have disrespected and angered Kinabalu – with a fatal earthquake that shook the mountain a week later. Those in custody may be charged for violating customary laws.

As a father of daughters – 23 and 26, both world travellers – I sympathize with the Petersen family and hope this situation will be quickly resolved and the young trekkers released, with sincere apologies made to the people of Malaysia.

But upon their return, I would offer some advice: Travel is a privilege, not a right. And the purpose of travel is to be open to the wonder of the other, to be sensitive and respectful of the differences that lend meaning to a journey.

Tourists can fly to the most remote outposts of the planet in a single day, taking their values with them, insulated in a cocoon of comfort. Think of French and German women blithely sunbathing, topless, on the beaches of Muslim North Africa or in the shadow of waterfront Hindu shrines in India. Travellers, in contrast, are loyal to everywhere, with home being the ground beneath their feet and respect for the local spirit of place being the natural and only way of things.

Malaysia is a profoundly Islamic country. Mount Kinabalu is the pride of the eastern state of Sabah. Some accounts say the name of the mountain means "the revered place of the dead." Others suggest it comes from a story of a shipwrecked Chinese prince who fell in love with a local girl. After he went home to China, his lover waited for him until she died of grief and the mountain turned her to stone, a symbol of everlasting love and devotion.

The peak where the Petersens and their friends shed their clothing is considered by the people of Sabah to be the sacred embodiment of a woman's virtue. As for causing the earthquake, let me note that in Borneo, even the flight of a hornbill has meaning, as if it were a cursive script of nature, written on the wind.

As an anthropologist, I am often asked how one breaks down the barriers between people and an outsider living as their guest. Not bravado, I always reply, but rather the same qualities that would make a visitor welcome in your own home: Respect, good manners, self-deprecating humour, a willingness to eat what's put before you.

I once led a tour of affluent Americans to Brazil, landing in a state whose governor had recently been harassed by U.S. authorities in Miami. I warned my group to anticipate similar treatment; we too would be fingerprinted and photographed. I later learned that one tour member, a wealthy investment banker, told others that the only finger the Brazilians would see would be his middle one. Sure enough, while holding a numbered placard as he was being photographed, he gave the finger with both hands. He was arrested on the spot, taken to jail and then to court, and fined $50,000 to be paid in cash. To secure his release and allow our trip to continue, the others pooled their resources and came up with the cash. When asked for a contribution, I politely declined. 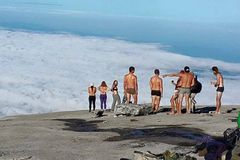 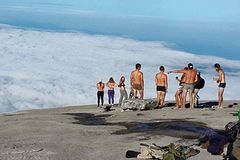