As has been noted in many quarters now, American politics seems to be broken. What's less documented are the increasingly urgent attempts to repair it.

What follows is one side of one such attempt. It's a transcription of a tape leaked to me by a worker at a political-support desk.

Hello, you've reached … Okay, calm down, I'm here to help. Take a deep breath and tell me what the problem is.

Hmm, your politics aren't working? Don't worry, we deal with this kind of thing all the time. Can you describe exactly what the issue is?

I'm sorry, you're going to have to speak more clearly; it sounded as if you said your candidates were making dick jokes about each other … Really? Let me get this down. R-u-b-i-o? Intentionally? So, not a smoking hot-mic situation, then? An actual penis-size bon mot levelled by a grown man at another grown man in an effort to win the highest office in the land?

Yes, I guess that's true. It would be more inappropriate had he made it about a child, but it does sound as if you have a problem … Oh, that's not your main concern …?

First things first. Have you tried turning your democracy off and then on again? It sounds as if maybe you should just shut down the election, let things cool off for a few years … Oh, right, term limits.

We're going to try to prioritize constitutional up time for you, and aim for a minimal amount of violent anarchy.

Have you checked your firewall?

We won't talk about walls, I mean, the "W" word, from now on. Yes, I understand why having your party's brand tied to the promise that, with you in power, Mexico will drop everything and up and build America's less practical version of Russia's White Sea Canal … I can see how that might ultimately cause your system to crash. Now, tell me what happens when you try to use your party to unite people around a political philosophy with the aim of improving society?

No, your screen is not frozen. We're getting a lot of those calls. I looked into it. Nothing frozen there at all. Those are just Chris Christie's eyes.

No, no, I understand your concern, but your screen's fine. That harrowing gaze is burned only into your soul. Perfectly normal … Wait? What? No! No! That is not normal! Political systems should not ooze! It's oozing? I am not sure what to advise you … Maybe get a towel?

Listen, did you, or maybe one of your kids, click on a link or download an attachment in an e-mail with the words "Kenya" "Birth certificate" and "Nobama" in the subject line a while back?

Oooooh, yeah. I would not have done that. I'm thinking the source of your problem could be what many in the media have started delicately calling "racial attitudes" or what we at the office still like to call "Goddamn racists."

Tell me, a few years ago – there were a lot of banner ads going about – you didn't click on something called "the Southern strategy," did you?

No, trust me, those aren't "libertarians" – I dealt with a lot of those in school. Those are Nazis.

Just to make sure we've covered every possibility, have you replaced any of the accessories that came with your system recently? This could all just be a driver issue.

Okay, yeah, that might be part of the problem. Your system's designed to work off standard AC power and a belief in small government and the free market, but a little "Google-fu" shows me that a third-party power supply puts out a lot of knuckle-dragging, inarticulate rage and xenophobia.

Now, I want you to open Political Explorer, right-click on "my political party" and select "information."

We're looking for "crazy motivation." If it's low, this whole thing may just fizzle itself out.

Oh. That's high. And they've already given the bombastic, third-rate shyster who wants to close the borders to both trade and Muslims, and make suing the press for libel as easy as going through a drive-thru, and force everyone to say "Merry Christmas" the most Super Tuesday delegates.

Don't cry … Yeah, this'll likely take a bit more than a reboot or even a full reinstall – we're looking at a hardware issue. You're probably going to have to replace your base. It sounds as if you've burned out your moderates.

Well, since we can't take the system offline, we're going to have to try hot-swapping in a runner-up candidate. Do you have any lying around? Look in your desk drawer.

Wait, really? Is there another Ted Cruz?

You can't mean the Ted Cruz of whom Republican Senator Lindsey Graham said, "If you killed Ted Cruz on the floor of the Senate, and the trial was in the Senate, nobody would convict you"?

The same Ted Cruz former Republican Speaker of the House John Boehner considers not only a "jackass" but a "false prophet?"

I am so sorry. Close the desk drawer.

You okay there? I hear screa… It's on fire!? Your system is oozing and on fire! There's the strong smell of sulphur and electoral defeat?

Well, we do have one last option. Do you have any respected elder statesmen who could just bury him with the sheer weight of their disapproval? Get out the old guard, make it clear how this guy runs completely contrary to your party's traditional values. Attack-ad him right into the recycle bin … Ah. Oooh. Mitt Romney.

Yes, I heard you say you also had George W. Bush, the guy who couldn't even help his own brother.

I'm going to have to transfer you to a senior technician. 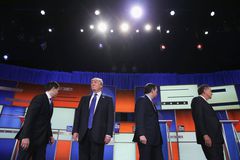