Justin Trudeau has an eye on overhauling the political culture. He wants to be Ottawa's renaissance man. His timing for the mission could hardly be better. If Canadians thought the operation run by Stephen Harper was ugly before, look at what we're hearing now. Not from Mr. Harper's opponents, but Conservatives themselves.

"They had almost a Stalinistic way of looking at things," Philippe Gervais, a former Tory campaign co-director, told iPolitics . "You were either on-side, or you were dead."

Here's Geoff Norquay, the long-time Harper defender on TV panels. In the next edition of Policy magazine, he writes what the political operation was really like under Harper favourite Jenni Byrne: "They ran a closed circle, they humiliated staff, they berated candidates, they pushed every reasonable argument far beyond its logical limit, they shut out others with a different view."

Party members are finally feeling free to speak out. A reckoning is on the way. For the leadership, many Tories will be looking for a candidate who wasn't an integral part of the Harperland culture. For the likes of Jason Kenney, that won't make it any easier.

But the reckoning sets the table for prime-minister-designate Trudeau. He probably won't be able to make much headway on major issues such as the low-wattage economy. Factors beyond Ottawa's control determine those outcomes. But as a stylish white-knight reformer of a debased democracy, there are all kinds of gains too be made.

Style doesn't make the man, but as Ronald Reagan and John F. Kennedy illustrated, it can change the morale, bring a new spirit to a country. Mr. Trudeau is no Reagan and he is no Kennedy but he has some of their charismatic attributes. If he doesn't settle for half-measures, he could bring a new spirit.

He has already signalled important changes to the way Ottawa works. For the first time, there will be gender parity in the federal cabinet. Instead of refusing to meet collectively with the premiers, he's joining hands. Freedom of speech will be restored to the gagged public service. A new voting system may be on the way.

The big test will come on openness and on how Mr. Trudeau responds to dissent. The wise leader doesn't demand agreement from everyone in his party. If the news media gets all excited about an MP going offside on some issue, he should take it in stride, as in, "So what? That's what a democracy is all about. The freedom to speak your mind."

A sure way for him to change politics would be to depoliticize the environment. The Conservatives were pilloried for running a permanent campaign. Mr. Trudeau won't have to face the electorate for another four years. If he is smart, he won't look at his standing in the opinion polls for the first three. If he is preoccupied with what's good for the public as opposed to the party, it will pay off.

To diminish patronage and channel bipartisanship, Mr. Trudeau needs to resurrect the good idea that Mr. Harper had – and subsequently discarded – of an independent public appointments commission.

Mr. Harper brought the West in. The new-generation leader needs to find a way to bring the youth in. A minister of youth or a youth secretariat of some kind might help.

To open information flows, the integrity of the access-to-information system needs be restored. A tough-minded journalist (I nominate the CBC's Neil Macdonald) would be a good choice to run it.

The language of leadership has become trite and banal. If Mr. Trudeau wants to be an inspirational leader, he needs (as Ottawa author Andrew Cohen who has written an engaging book about JFK points out) someone who knows how to make the language soar.

To restore civility to our politics, Mr. Trudeau should ban personal attack ads. To restore sanity to Question Period, the Speaker needs to be empowered so that questions are answered.

Reforms are needed – and wanted – by the score. No leader has ever had a better opportunity to change Canada's political culture. 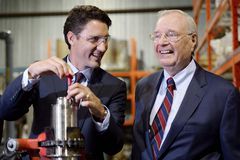