Tom Flanagan is professor emeritus of political science and a distinguished fellow at the University of Calgary's school of public policy. He is a former campaign manager for conservative parties.

By suspending Scott Andrews and Massimo Pacetti from his caucus, Liberal Leader Justin Trudeau has already sentenced them, even though he has referred their cases to the Speaker of the House and the Board of Internal Economy to reach a verdict.

Mr. Trudeau was placed in a difficult position when two New Democratic MPs made complaints against the two Liberals. If he had tried to investigate in confidence, he would have become vulnerable to a blindside attack from the NDP about suppression of evidence. By making the story public, Mr. Trudeau has turned the tables, leading NDP whip Nycole Turmel to complain, "The persons involved, the alleged victims of this harassment or misconduct, didn't know that this would be coming. So imagine, they are victims and they are victimized a second time."

The political gamesmanship would be mildly entertaining if the consequences for individuals weren't so serious. In a democracy, a political career has to be based on electability, which in turn is founded on personal reputation. Can the damage to the reputations of Mr. Andrews and Mr. Pacetti ever be undone, now that their leader has lent credibility to accusations of sexual misconduct? The headlines, now lodged all over the Internet, can never be called back.

The underlying problem is that there is no established procedure for handling complaints of this sort by MPs against each other. If a complaint is made to a police force, the police will conduct a preliminary investigation before deciding whether to lay charges. The investigation is usually confidential unless the accusations are already in the public domain. In the work world, employers must operate within the parameters of human-rights legislation and employment law. The House of Commons has procedures for handling complaints by staff against MPs, but none of this seems to apply to MPs' allegations of sexual misconduct against each other.

Politicians already love to accuse opponents of high crimes and misdemeanours. Calls for both criminal and civil investigation occur almost daily. Most pass without any consequence, but sometimes the complainant hits the jackpot. We should never forget Dec. 28, 2005, when, in the middle of an election campaign, Commissioner Giuliano Zaccardelli announced an RCMP investigation of NDP charges that Liberal finance minister Ralph Goodale had leaked news of impending tax changes to income trusts.

This was the mother of all turning points for a Liberal election campaign that was already starting to waver. In 2007, the RCMP announced that the charges against Mr. Goodale were without foundation, but in the meantime, the Liberal campaign had collapsed and the Conservatives had won the election, held on Jan. 23, 2006. The RCMP investigation may not have determined the election's course, but it certainly didn't help the Liberals. Ironically, NDP charges against the Liberals helped to elect the Conservatives.

The last thing we should do is to facilitate a new kind of allegation – sexual misconduct by MPs against each other – without establishing a rational procedure for sifting evidence while protecting reputations. Yet that may be the result if Mr. Trudeau's explanation, that he had to "give the benefit of the doubt to those who come forward," stands unchallenged. What happened to presumption of innocence, due process, natural justice?

MPs are not helpless children or naive interns. They are mature adults who have been toughened by public struggles for nomination and election. Because the competitive process of getting elected predisposes them to levy charges against opponents, we shouldn't make it even easier for them to start making career-destroying allegations of sexual misconduct.

Scandals in the Senate and campaign violations by MPs have already cast a shadow over Parliament. Now, MPs seem on the verge of opening the bottomless abyss of sexual misconduct. Party leaders need to come together quickly to establish a regular procedure for handling such matters, one that can establish the truth or falsity of allegations without destroying reputations on the basis of secret allegations and undisclosed evidence.

Two Liberal MPs kicked out of caucus amid allegations of misconduct
November 5, 2014 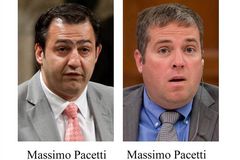