Is Donald Trump not just a boor but a fascist? The eminent historian Michael Marrus raised this question here on Monday. He did not presume to resolve it, but adduced some disturbing utterances supporting an answer of yes. I'm convinced that the answer is no. Mr. Trump certainly says things that no responsible democratic politician would say. Still, he remains a democratic politician – just an irresponsible one. We would misunderstand his significance for American politics if we miscast him as a fascist.

First off, Mr. Trump is too smart to be a fascist. He didn't make all that money without a grasp of the basic conditions of doing business, and in the conditions of current American politics, fascism is thankfully a nonstarter. Fascism arose, as Prof. Marrus knows, as a particular historical phenomenon born of particular circumstances. It blossomed in the blighted soil of Europe after the Great War, decimated by conflict and influenza, stunned by the collapse of four great empires and fearful of ascendant Bolshevism. It was a Europe littered with new nation states riven by ethnic hatreds and freshly minted republics with no history of free institutions. The Great Depression further afflicted those countries that had already turned to fascism as well as those that teetered on the edge of it. No such conditions pertain in the United States today, so there are no opportunities for fascists. Mr. Trump, on the other hand, is nothing if not an opportunist.

Fascism was not a scattering of mean-tempered remarks, it was a movement. Trumpism is not a movement (which is why the very term Trumpism sounds silly). All that Mr. Trump is running is a presidential campaign. Presidential campaigns are not social movements (not even when they are highly successful, as President Obama discovered to his grief). A movement requires the organization of broad strata of the population for some purpose other than getting out the vote. Such an achievement is as far beyond Mr. Trump's capabilities as it is alien to his intentions. The guy just wants to win enough votes to be president, with apparently the only vaguest notions as to what to do if he gets there. (On the global scene, for example, he seems to plan to thunder like Zeus.)

Consider the crucial issue of violence. Mr. Trump has said intemperate things about dealing with hecklers, but typically for him, the only action he's taken on these statements is either to deny them or apologize for them. By fascist standards he is a complete wimp. Fascism was all about the ruthless application of violence. Violence saved, cleansed, purified, intimidated and empowered. Mussolini had his black shirts and Hitler his brown shirts; Mr. Trump has yet to recruit a single mauve shirt. (I tried to find a colour reflecting his fashion sense.) Mussolini marched on Rome. Mr. Trump couldn't march on Atlantic City, and wouldn't, as it would scare away voters.

Lastly, there's the matter of ideology. As a thoroughly modern movement, fascism required an ideology, a quasi-scientific theory of society to justify its program as rational. It also required propaganda to blare this teaching to mobilize the masses. So Mussolini had his Giovanni Gentile, the neo-Hegelian self-styled "philosopher of fascism," and Hitler had his Alfred Rosenberg, Julius Streicher, Albert Speer, and Joseph Goebbels.

Whatever else you might think of Mr. Trump, he may be the least doctrinaire of the candidates. Do you know what he thinks? Even he doesn't know what he thinks. He certainly patronizes no ideology. There's just no -ism there (not even conservatism, really). His only philosophy is that of the deal; his only principle, getting things done. And just this resonates with his (mostly anti-intellectual) voters.

Yes, Mr. Trump attracts support from the rightmost fringes of the Republican party. The voters he courts are angry and disaffected. It's therefore not surprising that he says many things that appall liberals and disturb Prof. Marrus. To do so is at the same time his shrewdly chosen strategy – he knows his constituency – and his personal delight. Still, the rightmost fringes of the Republican party remain well within the ambit of liberal democracy. To call Mr. Trump a fascist seems a stretch. 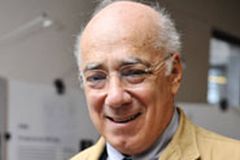 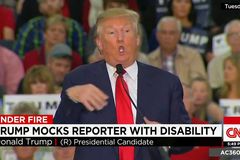