The United States has concentrated military hardware on and around the Korean peninsula as a means to deter North Korea from further testing nuclear devices and missiles, including a so-called armada to frighten North Korea into a stand-down. This t maneuver was a failure at the start because it lacks credibility as a deterrent force and a realistic military and political strategy as guide. Indeed, Pyongyang launched a land-based missile on Saturday in the midst of the Trump administration's tough talk and actions.

The reality is that North Korea's nuclear capabilities make conventional deterrence somewhat obsolete or, at the least, lacking, since the 1954 U.S.-South Korea defence treaty – and the accompanying U.S. permanent bases never imagined the possibility of a nuclear North Korea. U.S. nuclear deterrence strategy is based on great-power nuclear capacity, primarily Russia and China, not saber-rattling by lesser powers.

The White House briefed U.S. senators on April 26 about its North Korea policy review, completed weeks before this crisis. Power projection, which is happening now, was one of the options considered; diplomacy was mentioned as desirable, but there is no such plan. And upgrading the U.S. deterrence to meet nuclear challenges from smaller powers is not on the agenda. Senator Chris Murphy, a Connecticut Democrat who attended the meeting, said "there was no new information" and that it was "PR show of force by the White House."

Related: China and North Korea at the edge of patience: A view from the border of two nuclear neighbours

Certainly, conventional deterrence has worked for a long time. Since the 1953 truce that ceased the active fighting of the Korean War (1950-53), there has been no serious breach by North Korea.

But the current military buildup by Washington is not a true deterrent force. It amounts to encirclement of North Korea by the aircraft carrier USS Carl Vinson strike group. Japanese navy destroyers and South Korean war vessels are also engaged. All this comes in the midst of joint U.S.-South Korea military exercises that have been ongoing since March. Operation Foal Eagle, which is to end April 30, is enacting for the second time the new OPLAN 5015, the blueprint for fighting an actual war on the peninsula. The practice includes precision strikes against North Korea's nuclear, missile, and command and control facilities, "decapitation" raids by Special Forces to eliminate Pyongyang's top leadership, humanitarian responses to regime collapse, and other contingencies.

The annual exercises of 2016 and 2017 have become the largest in terms of troops and equipment, supplies and weapons, with close to 320,000 combined South Korean and U.S. forces. The Kim Jong-un regime has more to worry about now since a "bigger number of and more diverse U.S. special operation forces [are taking] part this year" and are practising to infiltrate the North and "neutralize" its war command and principal military facilities. Rumours that SEAL Team 6, which killed Osama bin Laden, joined the war games and will "eliminate" Kim are rampant across the conservative media in the United States and Great Britain.

In this context, North Korea has been putting on its own military show with the "largest-ever" live-fire artillery drill the day the USS Michigan, one of the largest submarines in the world, carrying around 150 Tomahawk missiles, docked in South Korea. Pyongyang has sworn to fight back with everything it has if North Korea is attacked. They possess the capabilities to inflict serious damage to the U.S. forces and to South Korea.

Deterrence works best when the threat of punishment is credible, and its success lies in the absence of outright military engagement. Getting into a fight means deterrence has failed.

Most important, Washington lacks a strategy: How long will the Vinson strike group remain at North Korea's doorstep? And what exactly is the carrier group tasked to do if Pyongyang conducts a test or launch? The answer was clear after the Saturday launch: nothing. In the future, will the armada lob cruise missiles at the testing site after the launch? Then what? Do failed launches like that of Saturday count as legitimate reasons for retaliation? And what kinds of missile tests would be deemed worthy of a precision strike by the U.S.– short-range and medium-range, which threaten South Korea and Japan, or intercontinental ballistic missile tests, which advance North Korea's ability to attack the United States?

Additionally, the expedited deployment in South Korea of the most advanced missile defence system, the U.S. Terminal High Altitude Area Defense (THAAD) system has severely angered Beijing as well as Pyongyang. The overwhelming U.S. military presence, together with the deployment of THAAD, could force Beijing to confirm that Washington is indeed encircling China, too, despite U.S. President Donald Trump's promises to make a deal.

The United States and its allies can threaten North Korea with an armada, and talk tough until they're blue in the face, but Pyongyang will not give up its nuclear weapons. It has said so repeatedly, and unlike the U.S. President, North Korean leaders don't change their minds often.

China and North Korea at the edge of patience: A view from the border of two nuclear neighbours
April 28, 2017 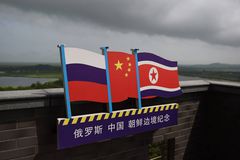 Trump says China pressuring North Korea on missile, nukes
April 29, 2017
The Latest: Trump says China putting pressure on North Korea
April 29, 2017
Follow us on Twitter @globedebate Opens in a new window
Report an error
Due to technical reasons, we have temporarily removed commenting from our articles. We hope to have this fixed soon. Thank you for your patience. If you are looking to give feedback on our new site, please send it along to feedback@globeandmail.com. If you want to write a letter to the editor, please forward to letters@globeandmail.com.
Comments