When Donald Trump Jr. was 12, he told his father what he thought of him. "How can you say you love us? You don't love us! You don't even love yourself. You just love your money," he said, according to a September 1990, Vanity Fair profile.

The young Trump was reeling from his parents' bitter divorce and the collapse of his father's empire. As he grew up, being Donald Trump's son didn't seem to get easier. College friends recall Trump Jr. as a "drunk" who "despised" a father who allegedly beat him. But Donald Jr. continued to try to appease the man who denied him love. He entered the family real estate business, where he spoke candidly about their overseas ventures. "Russians make up a pretty disproportionate cross-section of a lot of our assets," he said in 2008.

Now Donald Trump Jr. is in trouble. On Tuesday, he confirmed a New York Times article alleging that he had met with Russian lawyer Natalia Veselnitskaya along with campaign manager Paul Manafort and brother-in-law Jared Kushner – a meeting all had previously failed to disclose – by tweeting what he called "the full e-mail chain" of how the meeting was arranged.

Read Donald Trump Jr.'s e-mail chain about the meeting with the Russian lawyer

In one e-mail, Rob Goldstone, the publicist for Emin, the pop-star son of Moscow oligarch Aras Agalarov, wrote that he had access to "very high level and sensitive information but [it] is part of Russia and its government's support for Mr. Trump." Mr. Trump Jr. agreed to meet and took Mr. Manafort and Mr. Kushner along with him, possibly breaking a number of U.S. federal laws in the process. These range from campaign finance laws, which prohibit solicitation from a foreign power, to further confirming that Mr. Kushner had omitted information on his SF-86 security clearance forms, which require government employees to list meetings with foreign officials. If one lies on an SF-86, it is a federal crime that usually results in loss of clearance, termination, and even prison time. There have been calls for Mr. Kushner to be removed from his position for months, but nothing has been done.

Moreover, the younger Trump's tweets provide yet more evidence of collusion and possible treason, allegations that have only been supported by President Trump's behaviour since his meeting with Russian President Vladimir Putin at the G20 meeting last week in Hamburg. On Sunday, the President vaguely tweeted that he "gave the country away." The day before, he announced the creation of a joint U.S.-Russia "cyber-security group", despite the fact that Russia has not only interfered in U.S. elections but hacked U.S. infrastructure, including recent attacks on nuclear plants that may give Russians the ability to impact U.S. power grids. In his every action, Mr. Trump displays enthusiasm for collaborating with a hostile state threatening U.S. interests.

In the midst of this morass is Donald Trump Jr. who, unlike his favoured sister Ivanka, has never held a position in the White House, seemingly sidelined in this burgeoning dynastic kleptocracy. After the Times broke the story of Mr. Trump Jr.'s illicit meeting, Mr. Trump Jr. hired a lawyer who specializes in defending Russian hackers, white-collar criminals, and the Mafia. In one case, the lawyer had a client turn on his father to avoid jail.

Has Donald Trump Jr. turned, cutting some sort of deal that makes him comfortable posting incriminating information? Or are his tweets yet another example of the Trump family assuming they are above the law?

With the exception of former national security adviser Michael Flynn, no one implicated in the Russian interference scandal has faced repercussions – not Mr. Manafort; not Mr. Kushner; not President Trump, even after he possibly committed obstruction of justice by admitting in an interview with Lester Holt that he fired former FBI head James Comey to get him off his back; not Attorney-General Jeff Sessions, who was supposed to recuse himself from the investigation but did not, participating instead in the firing of Mr. Comey; and not the many others under federal investigation.

We know that when Mr. Trump is investigated, he fires the investigator. So who will mete out punishment for Mr. Trump Jr.? Possibly no one, since both the President and Mr. Sessions abuse their respective positions to protect their own. The administration has long run on autocrat logic: "We know you know what we did, and we don't care, because there's nothing you can do about it," their brazen actions imply.

In 1990, a boy condemned the greed and cruelty of his father. Now, that greed and cruelty threaten to devour the nation whole. Is Donald Trump Jr. exposing alleged crimes or perpetuating them? For a family this flagrantly abusive, the answer is usually both. 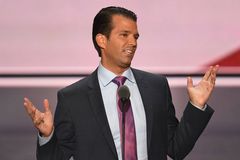