Until this week, it was one of those hypothetical scenarios you encountered in international-relations essays and nuclear-disarmament pamphlets: What if a delusional man has his finger on the button? What if his honour, his standing, his political legitimacy depend on him pushing that button?

We are now witnessing the most implausible version of that scenario: Two delusional men, on opposite sides of the Pacific, both apparently believing that their honour and political standing teeter on the credibility of their threats.

Of course, it's not quite that bad. Donald Trump and Kim Jong Un both have long histories of making histrionic threats that never amount to anything. They both have militaries who may or may not obey their commands. Mr. Trump could not even get anyone to deliver on his threat to ban transgendered people from the military. He made up his "fire and fury" threat while golfing, and appears to have returned to yet more golfing without following up on it.

But, beyond its goosebump-raising aura of chaotic incompetence, this showdown does carry much more frightening implications. Mr. Trump has now blustered himself into a mortal paradox in which his threats may jeopardize any hope of a North Korean solution, while a failure to carry through on those threats could jeopardize his own position.

Mr. Trump was probably thinking, on some level, of Richard Nixon's "madman theory" – if you can convince your adversary that you're crazy enough to burn their country to the ground without provocation, then they're more likely to give in on negotiations.

He probably knows the phrase (it's used a lot on Fox News). He probably doesn't remember its outcome: Mr. Nixon, in order to shock the North Vietnamese into an armistice, didn't just threaten them – he actually firebombed much of Vietnam, Cambodia and Laos for months. Even then, it didn't work: the peace soon fell apart and Saigon fell to the communists.

Even hawks don't think that could work in North Korea. Eliot Cohen, the neoconservative former foreign-policy adviser to the George W. Bush administration (he was hawkish enough to advocate war with Iran a decade ago), explained his source of alarm on Wednesday:

"Maybe it is all bluff. If it is, Trump will inflict a dangerous wound to American foreign policy, for his threats will probably be shown to be hollow. If loose words about fire and fury are a mere negotiating tactic, they will not deliver what the United States desires, because the North Koreans have every reason to want nuclear weapons... If it is not a ploy, however, the administration is probably considering when to launch the Second Korean War."

Any conventional strike on North Korea would, at a minimum, turn most of Asia against the United States. It would almost certainly cause significant destruction and death in South Korea and send tens of millions of refugees flooding into China – and there is no love for North Korea or its people in China.

As well, Beijing would see any unilateral action by the West against Pyongyang, probably accurately, as an attempt to create a U.S.-allied regime on the Chinese border or occupy the territory with Western weapons. This would likely force China to intervene in the conflict in defence of Pyongyang, at best returning everything to a much deadlier and more intractable version of the status quo and at worst triggering a nuclear-superpower war.

But Mr. Trump's threats have made alternative outcomes less likely. Any hope of using multilateral sanctions and isolation to persuade Mr. Kim to abandon his nuclear program has been lost. And Mr. Trump has snapped the one remaining arrow in his quiver: The fact that Beijing is as alarmed by Mr. Kim as Washington is.

"Ultimately, the only approach that might work is one that has not yet been tried: a joint effort by the U.S. and China," writes Jessica Mathews, a former National Security Council official who specializes in nuclear diplomacy. "Both sides' interests would be met by a unified, denuclearized, neutral Korea… the process of getting there would be tortuous and require a degree of mutual trust between Washington and Beijing that does not now exist."

Regime change would have to be on China's terms. The United States would have to face tradeoffs, including a loss of wider authority. Mr. Trump, by turning to threats, has foreclosed that difficult, but possibly workable, option.

He now faces a humiliating choice: He will either be seen to lose, or he will trigger a circumstance in which we all lose. 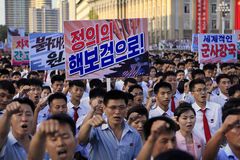 What you need to know about Guam, the centre of U.S.-North Korea tension
August 9, 2017
Markets must now consider what was once unimaginable
August 9, 2017 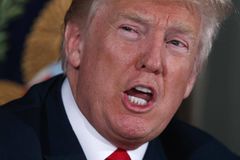