Anything can happen in politics, and November is almost three months away. But if I were you, I'd stop hyperventilating about Donald Trump. It has finally dawned on people that they probably do not want to elect a nutbar as president of the United States. Not all the people, of course, but enough of them to matter. He's behind in opinion polls, and almost every day he demonstrates his amazing talent for self-sabotage.

What's even more amazing is how easily the media are baited. They fall into a swoon over every fresh outrage. But why? It's plain he just can't help himself. He's completely unable to filter whatever idle thoughts flit across his brainpan.

"It's a fire hose," a senior Clinton adviser told Time. "He can set himself on fire at breakfast, kill a nun at lunch and waterboard a puppy in the afternoon. And that doesn't even get us to prime time."

This election was always going to be a referendum on the fitness of Donald Trump. He's flunked.

But that doesn't mean you can relax. Trumpism – the nativist, anti-establishment revolt that has swept the United States – is here to stay, and will disrupt American life for years to come.

The standard explanation for the rise of Trumpism is that globalization and the changing demographic face of America have left working-class white men behind, and Trump has channelled their discontent. But it's more than that.

The roots of Trumpism lie in a social malaise and a fundamental economic shift that have been building for decades.

The collapse of social cohesion explains part of it. No one really wants to go back to the supposedly idyllic 1950s – racism was common, segregation was widespread, women were trapped in the kitchen and gays were thrown in jail. Even the food was awful.

But people believed in their institutions. They believed in Ike (or Lester Pearson). Their politics were centrist. They went to church and knew their neighbours. For better or for worse, they got and stayed married. Most kids grew up with Mom and Dad.

Almost all Americans believed their country was a powerful force for good in the world. (Happily, most Canadians still share this quaint notion.)

YAKABUSKI: A presidential campaign that is certifiably alarming

Between then and now, all of that came unglued – religion, family, pride in country and especially trust in institutions. Upper-middle-class life diverged more and more sharply from working-class life, and now they are worlds apart. The inequality that matters today isn't money. It's social capital – the stable families, social networks and educational prospects that upper-middle-class kids can rely on and lower-middle-class kids cannot. If you want to understand Trumpism, read the works of Charles Murray and Robert Putnam.

U.S. economic forces shifted, too. Economic growth – the tide that lifts all boats – started slowing in the 1970s and never picked up again. Then came the decline in manufacturing, which was actually a decline in jobs, not output. Most of those jobs weren't lost to globalization or free trade, but to technology.

The American thinker Walter Russell Mead likens our era to the turn of the last century, when vast increases in agricultural efficiency drove millions of farm workers to the city. They found jobs in the new industrial economy, which created the modern middle class. Whether we'll be so lucky this time is a matter of hot debate.

Add to that political stagnation, with more and more interest groups to claim their share of the spoils. By now, the spoils are spoken for, and U.S. politicians have very little room to manoeuvre.

Add in a long and costly string of foreign misadventures – along with unchecked illegal immigration – and it's not surprising that so many Americans feel they've lost control.

Neither the Republicans nor the Democrats have been able to muster any coherent response to these threats. The Democrats have morphed into an alliance of liberal elites and minorities, with a relentless agenda of political correctness that has driven millions of people away.

The Republicans have doubled down on everything the white working class is against: unrestricted immigration, attacks on their entitlements, an aggressive foreign policy that promises more useless foreign wars.

Against this backdrop, Donald Trump, or someone like him, was inevitable. The greatest danger in his defeat would be if both Republicans and Democrats decide they were right all along, and don't need to change. Because if they don't, another Trump will come along. And the next one might not be crazy. 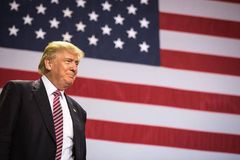