From his days as a tabloid staple to his scandal-ridden campaign, Donald Trump operated under the rubric that there is no such thing as bad publicity. As long as the focus was on him – and as long as a ruthless team of NDA-granting lawyers could help him buttress the blows – all attention was welcome. Mr. Trump could not be shamed, for he had no shame; he could not lose, because he'd rewrite the rules. Lies were always truths for Donald Trump.

Pundits who expected Mr. Trump to become presidential found instead that the office exacerbated his worst tendencies: the narcissism was now backed by executive power, and the media now had no choice but to cover him constantly as the leader of the free world. Under political pressure but still craving the spotlight, Mr. Trump controlled the press by communicating almost entirely through Twitter, a one-sided relationship that continues to this day.

But there was a weakness in this formulation. In 2017, Mr. Trump encountered a form of publicity that was actually toxic: the threat of an indictment. And it is in the shadow of the federal investigation into the Kremlin ties and financial malfeasance of the president and his team that Michael Wolff's new book, Fire and Fury: Inside the Trump White House, emerged.

Mr. Wolff is a journalist best known for scintillating smackdowns of New York's media and business elite. It was therefore somewhat surprising that Mr. Trump – who had been interviewed by Mr. Wolff and came from the same social circle – would allow a notorious gossip to roam around the White House with a tape recorder. It was even more baffling when the media-savvy president raged against the book, threatening to ban it and therefore guaranteeing it would become a hit.

That is, until you actually read Fire and Fury. The bestseller is now infamous for its portrayal of a White House in utter chaos, an incompetent and rage-prone staff, and a child-like president unable to effectively complete the most rudimentary task. Mr. Wolff's portrayal of the Trump administration seems largely accurate, and readers who paid close attention throughout 2017 will find few surprises.

But Fire and Fury is also an incomplete portrayal – and here is why the book is useful to Mr. Trump. The book begins with a bold and implausible claim: that Mr. Trump never wanted to win. It is followed by a secondary claim: Mr. Trump, not expecting to win, wandered haplessly into the White House as a political neophyte. He is presented as clueless instead of corrupt, as are the staffers surrounding him.

This is simply false: Donald Trump sought the presidency for 30 years, flirting with a run or running in 1988, 2000, 2012 and 2016. His campaign team consisted of seasoned GOP operatives like Roger Stone and Paul Manafort, both of whom are implicated in the Russia probe. Mr. Trump very likely wanted to win, and then keep winning – which means ruling like a king instead of a president, a goal he hasn't quite achieved. Mr. Wolff omits the president's political history as well as his abuses of power in office: there is nothing about his slick violations of the emoluments clause, for example, or even his infamous confession of obstruction of justice to Lester Holt.

The takeaway, instead, is that Donald Trump is a moron. While this may be true in terms of his geopolitical acumen, it is not the full picture. He may be purposefully ignorant of policy and emotionally volatile, but he understands power and spin, and his 40-year history of dodging criminal prosecution and manipulating the media testifies to a certain kind of skill. It is not the kind of skill that Mr. Trump – or apparently Michael Wolff – wants highlighted.

The "Trump is too much of a neophyte to have knowingly committed a crime" narrative is a favourite of the GOP, and they have been spouting it since the spring. Fire and Fury gives it renewed life, as do Trump's tweets on Saturday, in which he proclaimed in an ostentatiously moronic way that he's not a moron. As evidence mounts in the Mueller probe, Mr. Trump seems to be casting himself as a dupe instead of a deceiver.

In a typical passage, Mr. Wolff describes Mr. Trump as "a baffled president plaintively wanting to know 'What's going on?'" Odds are good that Donald Trump knows a lot more than he wants you to know, and Fire and Fury, while personally humiliating, is politically helpful. Do not be fooled by the president who cried Wolff.

Trump describes self as ‘stable genius’ in Twitter tirade
January 6, 2018
Opinion
Washington is in overdrive and Trump is at the wheel
January 4, 2018 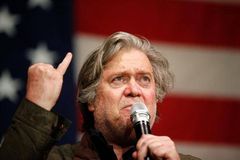