You don't need to wait until November to congratulate Donald Trump on his victory – as America's flip-flopper-in-chief.

The Republican presidential front-runner's verbal diarrhea is the result of his frightening intellectual laziness and helium-inflated ego. He has changed his positions on so many issues so many times, it's not clear he knows or cares what he really thinks so long as he earns the adulation of the "poorly educated" Americans he claims to love so much.

The one area where Mr. Trump would appear to have held a somewhat constant point of view over the years is foreign affairs. For three decades, he has been ranting about how the United States is being "ripped off" by its trading partners and military allies. In the 1980s and 1990s, he ranted about Japan dumping its goods and "knocking the hell out of our companies," while the United States spent billions defending allies "that would be wiped out in 15 minutes if it weren't for us."

Mr. Trump has since expanded his hit list of rippers-off to include China (especially China) and Mexico. And don't get him started on NATO. He calls the North Atlantic Treaty Organization "obsolete" and "unfair, economically, to us," which must be music to the ears of Vladimir Putin. The Russian President has sought to sow discord within NATO and chaos in Europe as he expands his own country's military and invades countries.

Mr. Trump also says Japan, South Korea and Saudi Arabia should take more responsibility for their own security, even if it means them acquiring nuclear weapons.

The logical outgrowth of this blather, to the degree logic can be applied to anything Mr. Trump says, is the emergence of a Trump Doctrine based on mercantilism and isolationism. Mr. Trump would weaponize trade, while leaving China, Japan and North Korea to sort out the Asia-Pacific. He would force Israel and Saudi Arabia to deal with an emboldened Iran on their own.

Unless he wouldn't. For all his talk of being sick and tired of watching his country go down the tubes economically while being endlessly dragged into foreign conflicts, Mr. Trump has vowed to "knock the hell out of" the Islamic State and send thousands of American troops to Syria and Iraq if that's what "the generals" tell him is needed to defeat IS.

He seems particularly hung up on "seizing" oil fields controlled by the terrorist group, which would more or less require a permanent U.S. military occupation of the region. Indeed, he has already antagonized Muslims so much that U.S. military and intelligence resources might be even more stretched keeping up with global threats than they are now. By condoning nuclear proliferation, he would set off a global arms race and raise the likelihood of radioactive materials falling into the hands of terrorists bent on building a dirty bomb.

Asked last year by NBC News where he gets foreign policy advice, Mr. Trump responded: "I really watch the shows." By that he meant the Sunday-morning political gabfests on U.S. networks, where former generals play back-seat driver on the most pressing national security issues confronting the White House and Pentagon. He wears his repudiation by most of the Republican foreign-policy establishment as a badge of honour, which to many war-weary Americans it admittedly is. But the list of foreign-policy advisers he released last week was singularly undistinguished.

Mr. Trump pegs the peak of American greatness somewhere around 1900, "when we were really starting to go robust." How the pre-nuclear age of horses and buggies trumps the post-Second World War Pax Americana is beyond anyone's comprehension but his. If he were to take any inspiration from the turn of the 20th century, it should be Theodore Roosevelt's admonition that the United States "speak softly and carry a big stick" in foreign affairs. Instead, Mr. Trump uses his mouth as weapon of mass intimidation, threatening anyone and everyone.

There is nothing coherent about the Trump Doctrine. That might be its genius, were its author not so "poorly educated" in global affairs. The best that can be said is that Mr. Trump aims to keep enemies and allies alike guessing. "I don't want to say what I'd do because, again, we need unpredictability," he insists. "I wouldn't want them to know what my real thinking is."

He needn't worry. To gauge Mr. Trump's thinking, you'd have to believe in its existence. 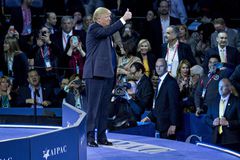