Do women suffer from a double standard in the workplace in relation to how they look? Have we gotten past the subtle (and sometimes not-so-subtle) shade of sexism in hiring and promotion – disproportionately affecting women – that I identified in 1991 as "the professional beauty quotient"?

It is hard to believe that we are still talking about this 20 years later, but we must. When anti-feminists make the case that there is now a "level playing field" for women, and that any gender gap in achievement and pay reflects women's own choices, they should consider what used to be called "lookism."

In a recent commentary, sociologist Michael Kimmel described an Iowa case in which 33-year-old dental technician Melissa Nelson was fired by her male boss, not for issues related to her job performance, but because he found her too sexually attractive to work beside without fear of jeopardizing his marital vows. When Ms. Nelson sued, the court issued a heinous ruling – upheld by the Iowa Supreme Court – affirming his right to dismiss her for this reason.

To be fair, there is now a professional premium on male looks as well. We all know that there is a reason that politicians spend $400 on haircuts and CEOs boast about working out at dawn with personal trainers. Looking healthy, fit, youthful and professional are now signs that male elites use to signal their status to one another in an advanced consumer and corporate economy.

But, as Ms. Nelson's case shows, women are not just subjected to the straightforward – equally onerous – lookism that men, too, might face on the job.

Young women, especially, suffer from discrimination in the workplace when they are seen as "too" aesthetically appealing. Many workplaces channel conventionally attractive young women into subordinate jobs where their appearance can add value to the corporate "brand," although no value is being added to their own careers.

Young women are put into these visible cheerleader roles even when their professional development might be better suited to their being unseen in a lab, or slogging away over copy late at night, or addressing a room from a position of authority. Potentially worse is the beating their confidence takes as they spend their 20s worrying, as their male peers – however attractive – almost never do, that their (generally minimal) advancement reflects an evaluation of their looks, and is not tied to their accomplishments.

Even more insidious is the reflex even today in major Western media whereby attention is regularly directed to the appearance and sexuality of powerful women, especially those in politics. The Huffington Post, an otherwise rational publication, ran a report about German Chancellor Angela Merkel under the headline Merkel's Cleavage Takes Centre Stage In German Elections, while anti-Merkel bloggers have called attention to Merkel's "attractiveness gap."

Germany's Die Partei, established by the editors of the satirical magazine Titanic, made light of the offensive trope, running a campaign under the slogan: "A woman? Yes, but attractive!" The late Christopher Hitchens, by contrast, was not joking when he parsed Margaret Thatcher's sex appeal.

This continual, rather fetishistic sexualizing of powerful women confirms the argument I made more than two decades ago in my book The Beauty Myth: Women's appearance is used against them most rigorously – as a diversionary tactic – when real social, economic, or political power is at stake and almost within their grasp.

It is doubtless demoralizing and distracting to an influential woman to be continually treated like a bimbo, or else told by major news outlets how unattractive, old, fat or badly dressed she is. This gauntlet of scrutiny is why young women with great leadership qualities are often reluctant to enter the public eye: They see this abuse as a no-win proposition, one that powerful men simply do not face.

Does the business press ever describe JPMorgan CEO Jamie Dimon as "pouty," or remark on his good hair and nice abs, as though he were a male stripper? Do they ever ask Ben Bernanke, "What's with the facial hair? It's not 1979." Do political reporters ever take Newt Gingrich to task for, say, being overweight, unfit and a poor dresser?

No. So why is it still acceptable to run public commentary about the state of Ms. Merkel's cleavage or Hillary Clinton's ankles?

We should try to imagine a world in which the Jamie Dimons and Newt Gingriches struggle daily to stay focused on their high-pressure jobs, while torrents of comment and attention are devoted to how "hot" and well-dressed they are, or alternatively, how out of shape, middle-aged and sexually unappealing they are.

Many countries have government agencies whose job is to ensure that women – and men – do not face workplace discrimination on the basis of their appearance. Unfortunately, that task has not been completed.

But, because the media play a major role in perpetuating this double standard, legislating or litigating against this kind of workplace harassment will not help. Sexist commentators have to scrutinize themselves; if they do so honestly, they will not like what they see in the mirror.

Naomi Wolf is a political activist and social critic whose most recent book is Vagina: A New Biography.

Opinion
The next sexual revolution is long overdue
October 6, 2012 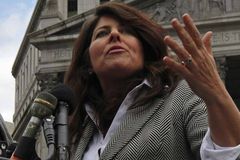