You know the U.K. election campaign has gone off the rails when even Nigel Farage says that it's too nasty. Yes, that Nigel Farage, the leader of the far-right UKIP party, who is campaigning on the fear that foreign HIV sufferers are draining the British public purse.

Even Mr. Farage is surprised (or at least pretending to be) that the tight race between Labour and Conservatives has descended into the muck. Worse, it's starting to look like something from across the pond: "I just fear that we have an election campaign that is turning into an American, negative, shouting match between two parties, and I don't think the public like it," Mr. Farage said. "I certainly don't."

This is a man who said he'd be worried if Romanians moved in next door, so he knows from nasty. The negativity that Mr. Farage was referring to has been brewing for a while in the U.K. general election campaign, and has just come to a head.

The top blew when Conservative Defence Secretary Michael Fallon wrote a piece in the Times of London about Labour's threat to Britain's nuclear deterrent, the Trident submarine program. Except he didn't just write about Labour policy, but also about the Labour leader, Ed Miliband – specifically, how Ed had stolen the leadership of the party from his brother and rival, David.

Those, as they used to say in gentlemen's clubs, are not sporting words. Ed Miliband accused the Conservatives of running a "gutter" campaign. Long-time Labour politician Ken Livingstone, known as "Red Ken" when he was mayor of London, added: "We should stick pompous Michael Fallon on the end of a nuclear missile and fire it off into space."

Another Tory MP tweeted that Vladimir Putin would be happy if Mr. Miliband became prime minister. This is what constitutes dirty play in British campaigning, and if it seems milquetoast by the brutal standards of North American mudslinging, consider that political ads are banned on TV and radio in the U.K. The British have not been treated to years of slurs and innuendo and ominous voice-overs.

Key manoeuvring still plays out in newspapers, where readers maintain political allegiance: You can be a North London Guardian reader who believes the Conservative coalition has spent five years waging war on the poor, or a fan of the Daily Mail, which sees welfare cheats behind every door and is not above using the phrase "NHS boob job scrounger" in a headline.

The other reason for the nasty turn is that the Conservatives feel their edge slipping away. Labour's explosive proposal to do away with "non-domicile" tax refugees – who are largely the wealthy foreigners driving up property prices and leaving their Lamborghinis illegally parked in London – was hugely popular. In a poll, 77 per cent of respondents approved of the plan, and only 20 per cent thought it was a bad idea.

By the end of last week, Labour was leading the Conservatives by a few points in three polls, and the positive perception of Mr. Miliband was also on the rise. Prior to that he'd been pegged as a nasally geek who couldn't connect with voters and didn't even know how to properly eat a bacon sandwich (or "butty," in the local parlance.) It was inconceivable only a few weeks ago, but he may be tomorrow's man.

There is time for both parties to take the high road before the May 7 vote, though it's doubtful. Each is set to release a policy platform this week – Labour on Monday and the Conservatives on Tuesday. The Tory backbench (a notoriously restless bunch) seems worried about the relentlessly negative tone of the campaign, if a story published in the Independent last week is anything to judge by. MPs are worried about the influence of the campaign's chief strategist, Australian Lynton Crosby, and are pressuring David Cameron to produce some "positive and eye-catching" policies in this week's manifesto. As one Tory MP moaned in the Independent story, "Where are the sunny uplands?"

There's a unique vivacity to the way British politicians talk, even when they're trash-talking. The tone of this election is certainly being watched by our politicians, who are about to embark on a campaign of their own. Whether they'll learn anything from it is another question entirely. 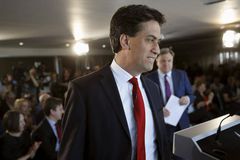