Four decades after I graduated from university, I still have The Dream. In it, I'm late for the final exam. I'm running through a maze of corridors trying to find the exam room. Then I realize I haven't been to any of the classes, and have no idea what the course was about. I'm cooked.

Stress is a fact of life at university. If you're not stressed out from time to time, then you're not paying attention. But now, many universities report that stress has reached epidemic levels. Counselling services are overwhelmed with students who can't cope. What to do? There's no shortage of ideas. Offer yoga classes and pet therapy. Get the faculty to "redesign" (lighten) the courses. Provide more accommodation for weak students. Reschedule exams so they aren't bunched up, and make sure students have lots of breaks between classes. How about late-night snack tables in the library at exam time?

Please don't get me wrong. I'm extremely sympathetic to the issue of students' mental health. The transition from adolescence to early adulthood can be really tough. Few students get through university without some encounter with depression, anxiety, panic, hysteria, anorexia, bulimia, loneliness, heartbreak, acute crises of identity or even suicidal thoughts. Some students are more fragile than others. It's cruel to tell them to just suck it up.

Still, there's a difference between providing help to students in distress, and infantilizing them. University is supposed to be challenging. As University of Saskatchewan professor Ken Coates (author of Campus Confidential) has pointed out many times, it's the place where you're supposed to learn to cope with your responsibilities and manage your time – without adult supervision. In other words, it's a lot like life. There'll always be times when your exams bunch up.

It's no surprise that today's kids are more stressed than ever. The stakes are extremely high (or so they've been told). Without a degree, they will wind up on the trash heap of life (or maybe open a hit restaurant). The job market is a Darwinian nightmare where only the fittest will survive. Yet, this generation is uniquely ill-equipped to deal with these pressures. They've been educated in a system that believes stress and setbacks are bad, where nobody is allowed to fail and deadlines are mere suggestions. No wonder self-discipline is not their thing.

On top of that, a lot of them aren't academically prepared. They barely squeaked through high school and they can't do the work. No wonder they're stressed. They're the victims of our delusion that simply attending university will automatically make them smarter and more successful. Yet, instead of strengthening their skills or steering them somewhere else, we've watered down the standards.

The most depressing aspect about these students is not how stressed they are but how passive they are. Professors I know describe their students as extraordinarily reluctant to engage in challenge or debate – even when part of their grade depends on it, and where challenge and debate are essential to a proper exploration of the subject. Is it because they're only interested in collecting the credential? Are they afraid of taking risks? Or are they terrified they might offend someone? After all, this is the generation that's been taught that diversity is good, conflict is bad, everyone's opinion is equally worthwhile and the most important thing is for us all to get along.

Poor kids. We've bred the independence and determination out of them. And now we're going to ask even less. Somehow, I don't think this is going to work. 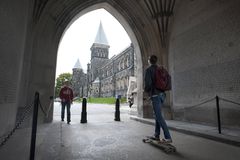 You said it: What should universities do to address student stress and mental health?
June 19, 2017
Follow us on Twitter @globedebate Opens in a new window
Report an error Editorial code of conduct
Due to technical reasons, we have temporarily removed commenting from our articles. We hope to have this fixed soon. Thank you for your patience. If you are looking to give feedback on our new site, please send it along to feedback@globeandmail.com. If you want to write a letter to the editor, please forward to letters@globeandmail.com.
Comments are closed