Julie Stevens is an associate professor in the Department of Sport Management at Brock University in St. Catharines, Ont.

When USA Hockey and its national women's team recently announced that they had settled a thorny wage dispute – just three days before the players were to boycott the 2017 Women's World Hockey Championships – you could be forgiven for thinking that a difficult issue had been resolved. Watching Canada and USA open the tournament in a thrilling game on Friday (we lost, 2-0), the standoff seemed forgotten.

But the drama has simply illuminated a major obstacle that remains for many female players, from grassroots to high-performance levels.

As a scholar, coach and player, I closely followed the dispute and its outcome. But for the USA Hockey decision to really make a difference, similar change must happen within other national hockey federations – including Canada's.

Last December, I presented at the 2016 World Hockey Forum in Moscow and spoke about how to make women's hockey a sustainable global game. The most critical factor for this outcome is governance. There is no separate international or national women's hockey federation; the female game is managed within larger, male-dominated hockey associations. (The one exception is at a provincial level, the Ontario Women's Hockey Association.) So, not surprisingly, there are times when decisions made by these organizations do not always serve the interests of girls and women who play the game.

The growth of women's hockey, specifically at the elite level, has been noteworthy, a fact that may seem to undermine the claim that the female game is under-supported. This year marks the 30th anniversary of the first invitational women's world hockey tournament, held in North York, Ont. That event is widely credited as being the catalyst for today's world championship events as well as Olympic women's hockey competition. Many observers, including myself, recognize the spirited growth of high-performance women's and girls' hockey that has blossomed since that 1987 tournament.

USA Hockey's management of its women's national team program exemplifies this scenario. The American women have been dominant on the world stage, having won seven of the last nine world championships, so it is natural to think that this success has been a result of abundant resources to support the program, from local to national levels. Again, this has not historically been the case.

News media coverage of the just-ended labour dispute tended to take the broader context of the issue, and while most headlines focused on financial compensation as a key point, it was also noted that the players' issue went beyond personal income levels. They generally sought treatment that is equitable with the national men's team. Besides pay, the women need better equipment, travel expenses, meals, transportation, hotel accommodations, medical benefits and even child care when they participate in their national team program.

But, importantly, they also demanded improvements at the system level, where requests for better support of youth development, staffing, marketing and publicity were made and ultimately met.

In his book, The Struggle for Canadian Sport, Bruce Kidd, the former Canadian track and field star who went on to become an accomplished sport sociologist, says the success of women's sport in the 1920s was due to the fact that "girls' sport [was] run by girls". He noted the importance of a governance structure that had the best interests of women's sport, be it basketball, athletics or hockey, as it foundational principle.

The U.S. national women's hockey team championed a far greater cause than itself – the female game itself. USA Hockey is touting the resolution to this dispute as groundbreaking. It's time for Canadian hockey's local, provincial and national governing bodies to take action and follow the same path.

While Canada is a world leader of women's hockey on the ice, advocates of the sport must also see the importance of improving the system off of it. It may be the only way we stay on top of the podium.

Opinion
Why are NHL tickets expensive in Toronto? Because they’re cheap in Phoenix
March 14, 2017 Opinion
Some hope for the world: The Leafs are actually good
February 3, 2017 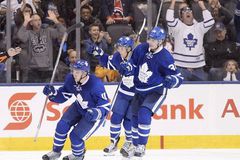