David Butt is a Toronto-based lawyer

Last week, an Alberta judge convicted Travis Vader of murdering Lyle and Marie McCann, and created a media and legal sensation by relying on a section of the Criminal Code that the Supreme Court struck down in 1990.

While everyone chatters about the judge's misstep and its possible consequences, we should pause to ponder that this whole mess went viral only because the judge delivered his ruling by live video feed. The camera's silent eye gave us all a crystal clear, instantaneous window into our justice proceedings; which should lead us to ask why cameras are not in every courtroom.

The same judge had earlier allowed the live-streaming, making clear he regarded it as an exception. He was right to let the camera roll, but completely wrong in suggesting it should be the exception. Cameras in courtrooms should be the norm.

The Supreme Court has repeatedly ruled that open courtrooms are essential in a modern democracy. The best way to open up our courtrooms is live video. So the absence of courtroom cameras is an indefensible disconnect between what courts say about openness, and what they do.

There are no good arguments against cameras in courtrooms. Cost is not a valid objection, when HD cameras are available in every big box retailer for a few hundred dollars. And media organizations that would directly benefit from courtroom live feeds could reasonably be asked to share the costs with government.

People used to argue that cameras would be disruptive. But now the technology is so unobtrusive and reliable as to render this argument obsolete. Some say cameras will diminish the solemnity of the proceedings. Do cameras diminish the solemnity of Remembrance Day services, or state funerals? Our most solemn court – the Supreme Court of Canada – live-streams all its proceedings.

Others argue that lawyers and witnesses will play to the camera, and undermine the court's important work. This argument also withers under thoughtful scrutiny. Witnesses come in two types: professional witnesses, such as experts and police officers who testify regularly; and common folks, who are invariably one-timers in court. The professionals know that superfluous dramatics will ruin their evidence. And lay witnesses are typically far too nervous to even think of mugging for the camera.

As for lawyers, the competent ones all know their goal of persuading a judge or jury will quickly be jeopardized by playing to the camera. Effective courtroom advocacy is substantively dense and stylistically understated. So grandstanding always looks out of place, distracting, and counterproductive. If some egocentric lawyer wants to ham it up and destroy his professional reputation in court and in living rooms across the country, then we should let him.

Some argue that video recordings of trials will undermine the traditional work of appeal courts, who will watch the video and inappropriately re-try the case. But appeal courts have a long and deep tradition of wisely deferring to trial courts' verdicts in the absence of serious legal errors. This tradition serves us well and can easily survive the presence of cameras.

Perhaps the best argument against courtroom cameras is sympathy for those suffering through the re-telling of monumentally tragic events. However, we rightly oblige those folks to testify in public, so an unobtrusive camera will add little to their already intense discomfort, and will greatly enhance public access to justice proceedings. And where cameras may occasion serious harm to witness privacy interests, exceptions and accommodations can be made. Judges are by training very good at balancing such competing considerations with sensitivity.

We should be collectively embarrassed that every awkward teenager with a smartphone can now have a bigger online video presence than our justice system. And as the Vader case shows so powerfully, cameras efficiently expose our justice system, warts and all, to public scrutiny. In a broader social context where concern about justice proceedings is very much on the rise of late, cameras should be part of every courtroom's near future. 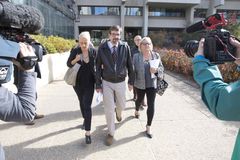