Imagine waking up in your new multimillion-dollar condo, with the enviable views of the ocean and mountains, and then looking out your living-room window to discover a starkly different scene: hundreds of angry, placard-waving protesters with the look of death in their eyes staring up at you.

If you are a resident of the new Trump International Hotel and Tower in Vancouver, you have already opened your drapes to that sight. The building bearing U.S. President Donald Trump's name was officially opened on Tuesday by his sons Eric and Donald Jr. in a ceremony that was bereft of the type of big-name political presence you might expect at such an event. It did, on the other hand, attract plenty of cops and thick-necked security personnel to guard the property against the protesters who showed up.

In the country's most left-leaning city, the Trump name is toxic. Mayor Gregor Robertson, knowing which side his support is buttered on, had earlier told the project developer the infamous trademark around which the tower was being sold was a blight on the city's skyline. Local officialdom has besieged Joo Kim Tiah, the wealthy Malaysian builder behind its construction, worried that the Trump moniker could sully the city's own precious progressive brand.

The opening has made international headlines, as anything to do with Mr. Trump does these days. The U.S. President's business operations have become the focus of acute attention; many have criticized his decision to hand control of his real-estate empire to his two older sons, saying the manoeuvre does not clear him of potential conflicts of interest. Some legal experts, meantime, believe his operations outside the United States could violate the "emoluments clause" of the U.S. constitution, which bars public officials from accepting payments or gifts from foreign governments without the consent of Congress.

Meantime, Mr. Trump and his supporters just shrug and wonder what all the fuss is about.

Like everything associated with the Trump brand, the tower in Vancouver is a glitzy attention-getter. Designed, in part, by the late Vancouver architect Arthur Erickson, the $360-million, 63-storey building seems to twist into the clouds. The provocative, breath-taking design has been over-shadowed by the noise created about the large chrome lettering spelling T-R-U-M-P outside.

Like properties associated with the family elsewhere, the Vancouver high-rise (part opulent residential, part extravagant hotel) is sure to become a beacon of protest as long as its namesake remains in the White House. Those living inside its walls will become prisoners, of sorts, to the whims of the President himself: They will not know when he will do something that angers the world and incites citizens in protest-loving Vancouver to use the building as an obvious venting point.

Who knows what kind of toll this will take on the business. It is hard to imagine the value of any of the spectacular residential units ever going down because of the tarnished Trump stamp. It is Vancouver after all. At the time the tower was being sold, the price per square foot was the highest in the country; most of those who bought into it (before Mr. Trump ran for president, it should be said in their defence) have the kind of resources to ride out a few bumpy years. How much they like being associated with someone many view as a pariah and menace to the planet is something else entirely.

The hotel may be another matter. People have a choice about staying there, and so will be making a statement, of sorts, about their political tastes as well as their predilections in accommodation. Some days, going in and out may mean running a gauntlet of demonstrators. Occupancy rates could ebb and flow with whatever waves are created by the President himself. Many would likely stay in a youth hostel before they would ever lay their head down on a pillow embroidered with the Trump name.

While some play down the fallout being predicted for the place, it would seem concern has set in among those planning to call it home. Recently, residents voted to increase insurance coverage for a terrorism-related event.

It is not a concern you typically find among those living in a luxury condominium tower, but then again, nothing is typical about one with Donald Trump's name on it. 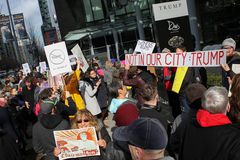 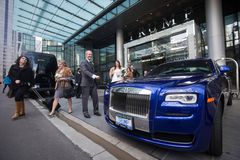 New Trump tower a beacon of controversy in multicultural Vancouver
February 19, 2017
Follow Gary Mason on Twitter @garymasonglobe
Report an error Editorial code of conduct
Due to technical reasons, we have temporarily removed commenting from our articles. We hope to have this fixed soon. Thank you for your patience. If you are looking to give feedback on our new site, please send it along to feedback@globeandmail.com. If you want to write a letter to the editor, please forward to letters@globeandmail.com.
Comments