Kenneth Frankel is president of the Canadian Council for the Americas.

There's a swatch of silver lining about North America at the end of this disturbing tale of Venezuela.

Several times along Venezuela's path of political and social unravelling, observers declared that the country had reached an inflection point. Rampant violence, food and medicine shortages, exponential inflation, violations of human and political rights, and widespread drug trafficking and kleptomania among government officials couldn't get any worse.

As the price of oil fell over the past several years, the government had fewer petro dollars to buy its way out of deep problems, or at least postpone their unmasking.

But, nothing ever inflected. The sign of the curvature hasn't changed.

Perhaps things might have evolved differently had some of the hemisphere's most influential countries made co-ordinated efforts along the way to persuade the Venezuelan government that it was in its best interests to hew to a few basic democratic principles.

Each of the countries had its own reasons for not doing so, even though many acknowledged privately Venezuela's anti-democratic actions. They feared the consequences of Venezuela's implosion, but none was willing to carry the banner without visible supporting flanks.

Their fall-back position was to support two mediation efforts – one led by ex-prime minister Jose Luis Rodriguez Zapatero of Spain and another by the Vatican. It appears that their lack of progress has succeeded only in providing the government with more time to enact more repressive measures.

Venezuela has arrived at another would-be inflection point. This one was brought on by the Venezuelan Supreme Court's recent decision to assign the legislature's powers to itself. (That the Supreme Court, upon a "request" made by Venezuelan President Nicolas Maduro, restored some of the powers only underscored the collapse of the separation of powers.)

Mr. Maduro then doubled down by banning from politics for 15 years another leading opposition figure, and distributing arms like Halloween candy to vigilante groups supporting the government.

Things may be changing.

All of the largest and most influential countries in the region regard Mr. Maduro's latest machination as the straw that broke the camel's back. We'll see. With the change in government in several countries, particularly Argentina and Brazil, there exists a critical mass showing more commitment to confront the issue multilaterally in support of the heretofore lonely crusade of Secretary General Luis Almagro of the Organization of American States.

Their task is complicated.

There is no indication that the Venezuelan government will ever be willing to accept outside help.

Each side is fractured and layered with recriminations, jealousies, divergent political and personal goals and power jockeying within its own ranks. It isn't clear if any of the current leaders will be left standing when the dust settles or that it would be in Venezuela's best interest if they were.

And for an extra layer of complication, extra-hemispheric players, China, Russia and Iran, all of whom have economic and political interests in Venezuela and the region, will be more than passive players.

Canada has done well at the OAS to help forge a consensus among the region's most influential countries to hold Venezuela accountable and ultimately find a resolution. Its posture has been fortified by the release two weeks ago of a report by the House of Commons Subcommittee on International Human Rights.

So here's a silver lining if you're a partisan of North American collaboration. Canada has unexpectedly found a leadership companion, Mexico, a country that had not been involved prominently on the Venezuelan file.

It's in the interests of Canada, Mexico and the United States that the Venezuelan crisis be resolved peacefully and without unsettling spillover effects in the region. This is also true for neighbouring Colombia, which is undergoing the delicate implementation of its peace process, and Central America and the Caribbean, where illicit Venezuelan activity is already underfoot.

By joining with Canada in this effort, Mexico challenges once again the idea circulating in some circles that Canada's relationship with Mexico should be considered only after Canada cuts a new North American free-trade deal with the United States, rather than remain an integral part of a trilateral arrangement. This Canada-Mexico collaboration also strengthens the platform for both to work together on other international matters, particularly when U.S. policy is unpredictable, constrained by its historical record in the region or counterproductive.

Opinion
How Venezuela can avoid suspension from the OAS
April 14, 2017
Opinion
Canada’s voice matters in the Western Hemisphere
May 17, 2018 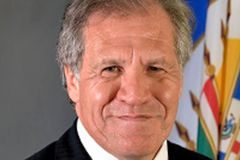 Opinion
Talk to a legitimate Mexican refugee and you’ll see: Canada is a friend
April 15, 2017
Follow us on Twitter @globedebate Opens in a new window
Report an error Editorial code of conduct
Due to technical reasons, we have temporarily removed commenting from our articles. We hope to have this fixed soon. Thank you for your patience. If you are looking to give feedback on our new site, please send it along to feedback@globeandmail.com. If you want to write a letter to the editor, please forward to letters@globeandmail.com.
Comments