Vladimir Putin is President of the Russian Federation.

The 25th anniversary APEC Economic Leaders' Meeting will take place in Danang, Vietnam, on Nov. 10 and 11.

We greatly value the APEC forum for the ample opportunities it affords all participants to engage in discussions and co-ordinate positions on a variety of economic, social, environmental, and cultural issues. Our countries strive to co-operate based on principles of consensus and voluntary participation, mutual respect and willingness to compromise, regardless of the political situation. This is what APEC's unique spirit of partnership is all about.

As a major Eurasian power with vast Far Eastern territories that boast significant potential, Russia has a stake in the successful future of the Asia-Pacific region and in promoting sustainable and comprehensive growth throughout its entire territory. We believe that effective economic integration based on the principles of openness, mutual benefit and the universal rules of the World Trade Organization is the primary means of achieving this goal.

We support the idea of forming an Asia-Pacific free-trade area. We believe this is in our practical interest and represents an opportunity to strengthen our positions in the rapidly growing Asia-Pacific region (APR) markets. I want to note that over the past five years, the share of APEC economies in Russia's foreign trade has increased to 31 per cent from 23, and to 24 per cent from 17 in exports. And we have no intention of stopping there.

Of course, the large-scale project to create the APEC free-trade area should be carried out with due account of the experience gained from implementing key integration formats in the APR and Eurasia, including the Eurasian Economic Union (EAEU), in which Russia co-operates with Armenia, Belarus, Kazakhstan and Kyrgyzstan. Our union has been developing dynamically, and we are eager to build relations with all countries and associations that are interested in doing so. Vietnam, the host of this year's Forum, was the first state to sign a free-trade agreement with the EAEU. As a result, our trade grew significantly and became more diversified. Talks on a trade and economic co-operation agreement with China concluded a short while ago. Talks with Singapore have begun, and we are working on the possibility of signing a free-trade agreement with ASEAN.

On a related note, I would like to raise the idea of creating a Greater Eurasian Partnership. We suggested forming it on the basis of the Eurasian Economic Union and China's Belt and Road initiative. To reiterate, this is a flexible modern project open to other participants.

Comprehensive development of infrastructure, including transport, telecommunications and energy, will serve as the basis for effective integration. Today, Russia is actively modernizing its seaports and airports in the Russian Far East, developing transcontinental rail routes, and building new gas and oil pipelines. We are committed to implementing bilateral and multilateral infrastructure projects that will link our economies and markets. Among other projects, I am referring to the Energy Super Ring that unites Russia, China, Japan, and South Korea, and the Sakhalin-Hokkaido transport link.

We pay special attention to integrating Russia's Siberian and Far Eastern territories into the network of APR economic ties. These efforts include a whole range of measures to enhance the investment appeal of our regions and to integrate Russian enterprises into international production chains.

For Russia, the development of our Far East is a national priority for the 21st century. We are talking about creating territories of advanced economic growth in that region, pursuing large-scale development of natural resources and supporting advanced high-tech industries, as well as investing in human capital, education and health care, and forming competitive research centres.

We hope that our foreign partners, primarily from APEC economies, will play an active role in implementing these programs and projects. All the more so now that foreign participants of the annual Eastern Economic Forum held in Vladivostok have already had a chance to gain confidence in the prospects and feasibility of our plans.

We have an equally serious approach to involving small and medium-sized businesses in APEC economic integration processes, and supporting female entrepreneurship and startup companies run by young entrepreneurs. Of course, we attach special importance to strengthening our cultural ties and expanding our contacts in the spheres of science and education. Looking ahead, we will focus on forming a common APR education space, one of whose centres could be the Far Eastern Federal University.

We believe that establishing effective co-operation to support innovation is the most important task we face in this dynamic era. As such, Russia has put forward a number of specific initiatives. These include unifying digital economy and trade rules, harmonizing national technical standards, co-ordinating strategies for forming high-tech markets, and creating a uniform conceptual framework for the digital space. We have also shared with our partners our experience in providing e-services to the public. In addition, we suggest starting consultations within APEC on international information security and protection of computer software.

Preventing and providing relief following natural disasters and man-made accidents, epidemics and pandemics is another challenge that requires a joint response by all APR partners. Of course, we need to tackle food security issues together and think about how to meet the region's rapidly growing demand for high-quality and healthy food. Russia is one of the world's leaders in exports of grain, vegetable oils, fish, and a number of other foods. We expect to become the leading supplier of ecologically clean food to our neighbours in the Asia-Pacific region. To do so, we are taking measures to increase agricultural output and improve productivity.

We intend to engage in substantive discussions of all these topics during the upcoming summit in Danang. I am confident that, acting together, we will find acceptable solutions to the challenge of supporting the steady, balanced, and harmonious growth of our shared region and securing its prosperity. Russia is ready for such a collaborative effort. 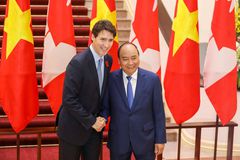