If there is a long lineup, and people in the queue need something, some of those people will do what they can to move ahead.

Queuing was endemic in Soviet-style regimes: for necessities (toothpaste, soap) and for services (telephones, apartments). So people did what they could, used what influence they could find, told whatever lies were necessary, and tried to move ahead.

Canadian health care is not Soviet-style, despite what its rhetorical critics sometimes allege. Thirty per cent of health-care spending isn't public at all; it's private, for a majority of drug costs, eye care, and lots of home care, long-term care and nursing homes. And the number of people within the public system who try to manipulate queues is small relative to the chronic wait times at every level of the system, except emergency and very acute care.

Canadian wait times are regrettably among the longest, or the longest, in the Western world, depending on the study. When such lengthy wait times exist, people will often do what they can to get their ailments attended to more quickly. If someone is in pain, or is simply apprehensive, to be told to wait and wait some more isn't what the doctor ordered, as the saying goes.

A few years ago, two prominent individuals made serious allegations that senior public figures and/or rich people in Alberta were gaming the waiting lists for themselves and/or friends. The two were Stephen Duckett, then-CEO of Alberta Health Services, and Raj Sherman, Liberal leader and ER doctor.

These were serious allegations from important figures in Alberta. The ensuing uproar caused a public inquiry to be created under a retired judge, John Vertes.

In his two-volume report, released recently, Mr. Vertes completely rejected these charges. Mr. Duckett has returned to his native Australia, and therefore is far removed geographically from apologizing. The same excuse cannot be offered to Dr. Sherman.

Having rejected the allegations, Mr. Vertes then examined the extent of preferential treatment within the Alberta health system. He found a few obvious instances of special treatment – Calgary Flames hockey players getting flu shots – and then made 12 recommendations for better managing wait lists and ensuring that no preferential access be granted. Just to enforce further these strictures, he urged extended whistle-blower protections for people wishing to allege queue-jumping.

It's the classic Canadian response to the problem of wait times: more regulation, better management, more surveillance. The only thing Mr. Vertes didn't suggest was more money, because that "solution" has been tried and found largely wanting.

In 2004, Canadian governments decided to inject $41-billion more into health care, indexed at 6 per cent annual increases. A little more than 10 per cent of this new money was directed at reducing wait times for five procedures: radiation, hip and knee replacements, hip fractures, cataract surgery and bypass surgery.

They then set "benchmarks" for what were deemed medically appropriate times to wait. But these time frames came with the loosest possible definition: the time between consultation with a specialist and surgery. In most other countries, the clock starts either with first consultation with a family doctor, or the reference from the doctor to a specialist.

So having given themselves easy benchmarks for wait times, by international standards, how have the provinces done? Put simply, they lowered some wait times, but none of them met their benchmarks. Ontario seems to have done best; Alberta comes in middle-of-the pack.

Worse, according to the Canadian Institute for Health Information, backsliding away from the benchmarks is now happening. About 21,000 more procedures in these five priorities areas were done in 2012 than in 2011, but demand increased faster than supply so that wait times grew in six provinces.

European countries have better – in some cases much better – wait time results than Canada. None of their innovations figure in Mr. Vertes's report, which was a classic command-and-control reply to a national problem.

As long as wait times don't improve, and the queues stay long and patient frustrations continue, at least some people will implore, hector, cajole, push and do whatever they can to get faster treatment. It's human nature. 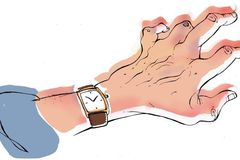 Opinion
Getting closer to a cure for what ails health care
April 26, 2013

Opinion
From accelerator to brake on health spending
March 29, 2013