This week, the same Mr. Bayne, an Ottawa lawyer, threw a series of bombs at the Conservative Party on behalf of his client, Senator Mike Duffy.

The explosions Mr. Bayne and his client ignited with their allegations Monday and Tuesday were still reverberating on Wednesday, forcing the Conservative Party's damage-control machine into its most energetic exertions yet to bury the three figures at the centre of the Senate spending scandal.

Unfortunately for the Conservatives, the intended corpses – former Conservative senators Mike Duffy, Pamela Wallin and Patrick Brazeau – are refusing to enter silently their political graves. They are lashing back with accusations of conspiracy, cover-up and false statements up to and including from Prime Minister Stephen Harper. If they go down, they are bloody determined to try to take some of their tormentors with them.

Protect the king is the first rule of political survival. The king, Mr. Harper, shook off the lassitude he displayed at Tuesday's Question Period, when he handed most answers to his overmatched and flustered parliamentary secretary. On Wednesday, he launched a blistering series of rebuttals to Mr. Bayne's and Mr. Duffy's claims that the Prime Minister's Office had tried to blunt any controversy surrounding Mr. Duffy's expenses.

Mr. Harper denied knowing anything about the $90,000 payment to the senator from Nigel Wright, the Prime Minister's former chief-of-staff. Only Mr. Wright knew about the payment. Had the Prime Minister known, he would have stopped it as inappropriate. He only told Mr. Duffy to pay his back expenses, period. Mr. Wright has done the honorable thing, admitted his mistake and resigned. Mr. Duffy did wrong and should pay by being suspended from the Senate.

Conservative MPs, whose demeanour Tuesday suggested they knew they were suffering a political licking, were greatly cheered by Mr. Harper's energy. Here was their leader in fighting form, finally parrying the inquisition led by NDP Leader Thomas Mulcair.

Mr. Mulcair's qualities to be prime minister remain for the people eventually to judge, but he has been superb as chief questioner in the Commons. His queries have been short, sharp, calm and effective, like those of a trained prosecutor building a case, in this instance that the government has not been truthful.

Politically, truth is the nub of the affair. The public will get lost, if it is not already, in the details of who is alleged to have said and done what to whom. What will count in the end is the general sense of who has been telling the truth. There was limited public sympathy for the three senators, and there likely is little now. But if the sense grows that the government covered up evidence, then the cover-up risks becoming more important than the original story.

For the Prime Minister to say what he repeated Wednesday – that he did not know – and be proven later to have said something false would cripple his reputation, which is why he is almost certainly telling the truth. He did not authorize the payment to Mr. Duffy.

But there is what is called "plausible deniability," whereby those around a leader do not tell him precisely what they are doing so he can claim ignorance if asked. The leader knows, but he really doesn't know.

From Mr. Harper himself, according to Mr. Duffy and Ms. Wallin, came orders conveyed to them by the Prime Minister's top people that they had to go. No protestations of innocence or due process or fairness or misunderstanding of the Senate rules earned a smidgen of charity. They had become a political liability, and they had to go.

Mr. Duffy and his two colleagues are facing a motion in the Senate of suspension, loss of pay and benefits and political exile. This motion, obviously on orders from the Prime Minister's office, defies all sense of fair play and due process, Ms. Wallin insisted Wednesday. Solid though this argument might be in law, it is irrelevant politically in the face of the Prime Minister's steely desire to get rid of the trio – and he hopes this entire mess – as swiftly as possible.

The Conservative Leader in the Senate insisted that his members were free to "vote their consciences," but those "consciences" (with one or two exceptions) will just happen to coincide with the wishes of the Prime Minister.

With so much noise and confusion this week, only if the RCMP lays charges will evidence be able to be sorted out at a trial. That process would take months, or probably years. Which suggests this issue might not be going away any time soon. 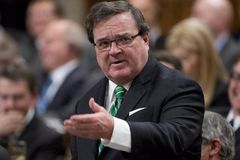 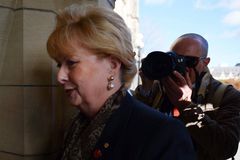 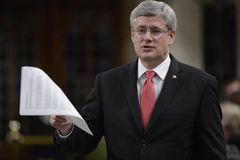 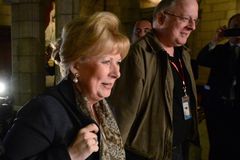