Haroon Ullah serves as the Chief Strategy Officer at the Broadcasting Board of Governors. A former senior adviser to three secretaries of state, and senior fellow at Harvard University's Belfer Center, Ullah is also the author of the new book Digital World War: Islamists, Extremists and the fight for Cyber Supremacy.

Last year, Russia and its allies engineered a rift between truth and lies, fact and fake news, humans and bots – and the bots are winning. They're winning because social-media firms profit from all traffic – whatever the source – and governments are simply too slow to counter this threat.

Add to this the evidence of Russian-backed attacks on key institutions of Western democracy: the European Union and Brexit, the Democratic National Committee and the Podesta e-mails. And top this off with a debilitating attack on the National Security Agency itself by an allegedly Russia-linked group called the Shadow Brokers. We are at "e-war": We've traded bullets for bots, soldiers for coders and the Berlin Wall for a firewall.

Russian disinformation – like its more overt Islamic State cousin – is designed to fuel animosities and exploit existing cleavages. The people behind it are not only hate-filled but also experts on audience segmentation. Although diametrically opposed to each other on social, ethnic, political and religious grounds, Russia and the Islamic State are ironically employing the very same techniques to further their respective agendas.

This battlefield – social media and the dark web – is the least understood piece of a new conflict. In essence, both the Russians and the Islamic State have weaponized information. The online ecosystem and their disaggregated strategy have kept them one step ahead of adversaries.

Recent research into both the Russians' and the Islamic State's models of propaganda, as well as interviews with defectors, unveil that: 1) people tend to believe something when it is repeated, 2) Russia and Islamic State fanboys gain the advantage when they get to make the first impression and 3) subsequent rebuttals may actually work to reinforce the original misinformation, rather than dissipate it.

The most effective way to respond to misinformation is not, as parts of the mainstream media have done, to counter every false meme story (such as the Charlottesville pitchfork memes or the broken Statue of Liberty meme that Islamic State sympathizers sent on the night of the Manhattan attack). Rather, the key is to direct a "stream" of pro-active, accurate messaging at the targeted audience.

Digital tools such as bots have tremendous advantages over humans. Research shows the Islamic State propaganda machine has configured an army of AI bots running on thousands or millions of user accounts at low cost. And pro-Putin forces use bots to "hype" calamity events, operating 24/7 and responding to events almost immediately. This content is then linked or distributed through key influencers. These bots are programmed to react to certain events and create content at machine speed, shaping the narrative almost immediately.

Research suggests that the more users rely on digital platforms for their news and information, the more exposure they have to a multitude of sources and stories. Both Russian and Islamic State extremists operate primarily on the information battlefield via social-media outlets, hidden forums and encrypted messaging over the dark web.

Online propagandists seek to distribute the costs of messaging broadly, shaping the social ecosystem to enable alternative voices to effectively challenge campaigns of the "establishment" or "status quo." Each group uses this to target the same troubled and grievance-laden youth. Both groups have used bitcoin for anonymous funding to build tools and infrastructure online, rather than construct just one specific message.

The "weaponization of information" battle pushes governments to ditch our unwieldy bureaucracy and use the very same tools the terrorists and enemies of the State are using – social media, slick viral campaigns and colourful emotive narratives. This would be our 21st century version of the historic "Manhattan Project" to effectively mobilize technological talent. At the heart of this new-age conflict is a content war. We must bring in reinforcements from MIT, Cal-Tech, Stanford and elsewhere. Content matters; just look at the "1, 9, 90" model that sees 1 per cent of social-media users as content creators; 9 per cent as curators sharing content; while 90 per cent are simply consumers. We need to mobilize that 90 per cent, to get them off the sidelines to produce authentic content. Using the best digital tools (off-the-shelf or newly developed), we can ensure that the right stories reach the right audiences.

Russia and the Islamic State are just the beginning: This playbook will start being adopted by countries and groups all over the world. If we mobilize now, we can win. 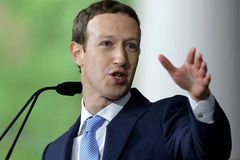 France’s Macron plans legislation overhaul to fight spread of 'fake news' in 2018
January 3, 2018
Fake news has wide reach but little impact, study suggests
January 2, 2018
Follow us on Twitter @globedebate Opens in a new window
Report an error
Due to technical reasons, we have temporarily removed commenting from our articles. We hope to have this fixed soon. Thank you for your patience. If you are looking to give feedback on our new site, please send it along to feedback@globeandmail.com. If you want to write a letter to the editor, please forward to letters@globeandmail.com.
Comments are closed