Craig Benjamin is the Amnesty International campaigner for indigenous rights, and co-author of the agency's recent Out of Sight, Out of Mind report

Before providing aid money to support resource development projects in other countries, Canadian policy requires a careful examination of how the project might affect the lives and safety of women and girls.

The Peace River region of B.C. is home to some of the most extensive and intensive resource development anywhere in Canada. While the resource sector has created high-paying jobs for many, and great wealth for B.C. and Canada as a whole, Amnesty International's research shows that it has had severe unintended consequences for indigenous peoples in northeast B.C. – consequences that compound the already high risk of violence facing indigenous women and girls in Canada.

The extraordinary scale of hydro development, oil and gas extraction, mining and logging has left First Nations and Métis people in northeast B.C. with little land left to practice cultural traditions such as hunting and gathering plant medicines. These traditions are vital to their cultural identities and a vital foundation for healing from the terrible social crisis created by residential schools and other colonial policies.

The resource sector relies on bringing large numbers of workers to the north. The temporary influx of workers strains the capacity of local services like daycares, and drives up the daily cost of living, resulting in profound economic insecurity for those without access to high-wage industry jobs. The gender income gap in northeast B.C. is almost double the national average.

Economic necessity leads some women to stay in abusive relationships because they cannot afford to leave. For others, this means living in unsafe housing. The vulnerability of women, and indigenous women in particular, getting by on low or fixed wages is of particular concern in the context of the high rate of violent crime in the region – one of the highest in Canada – that has accompanied rapid population growth.

In 2004, Amnesty International published a report called Stolen Sisters, which demonstrated that the economic marginalization of indigenous women, and the discrimination they face in Canadian society, are critical factors putting them in positions of increased risk, fuelling violence against them, and denying them the protections and support they deserve. At the time we noted that indigenous women had long struggled to draw public attention to these issues and that there was already, at that point, a significant body of government reports and other studies pointing to the need for action. Yet it is only now, with the launch of a national inquiry on missing and murdered indigenous women and girls, that we begin to see real government acknowledgment of the scale and urgency of this crisis.

When we began researching the specific factors affecting the safety of indigenous women and girls in northeast B.C., we were again struck by the fact these very concerns had already been repeatedly identified by indigenous peoples, front-line service providers and independent studies over three decades– all seemingly without impact on federal and provincial decision-making process surrounding resource development.

Decisions are made every day about the scale of resource development in regions like northeast B.C. and which projects should go ahead, all without any consideration of their specific impacts on the lives and safety of the women and girls we know are at greatest risk of harm. This needs to change and it needs to change now. At the very least, the government must extend the same consideration and protection to the lives of indigenous women and girls in Canada that it already affords to women and girls in other countries. 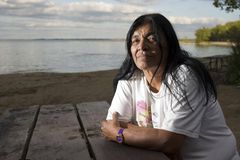 Wilson-Raybould lays out vision for UN indigenous rights declaration
May 17, 2018 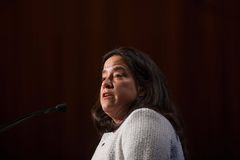