Eric M. Adams is a constitutional scholar and legal historian at the University of Alberta, Faculty of Law.

Jim Prentice recently made headlines by announcing that if elected leader of the Progressive Conservative Party of Alberta among his first acts as premier would be to pass an Accountability Act setting term limits for elected members of the provincial legislature. In the following days, Mr. Prentice equivocated about whether the limit – two terms for premier and three for MLAs – would be established by law, or simply as an internal rule of the PC Party. Regardless, he maintained that legislated term limits for elected representatives would be constitutional. He is wrong.

Presumably inspired by the U.S. constitutional restriction limiting the president to two terms in office, the Prentice proposal, if enacted as law, would restrict the ability of Canadian citizens to seek elected office in Alberta. Term limits would be novel in Canada. They are certainly foreign to Canada's parliamentary tradition, perhaps because, unlike the American system, there is no such thing as a set "term" in Parliament or legislatures. Even with the adoption of fixed election dates, the principle of responsible government demands that a government only lasts as long as it retains the confidence of the legislature. Especially in the context of a minority government, there may be only months between elections – Canada experienced three federal elections between 1962 and 1965, for example.

Moreover, many of Canada's most admired and successful politicians have been longstanding politicians. A recent poll of experts listed Peter Lougheed, Bill Davis, and Allan Blakeney as Canada's greatest premiers. All three led their governments to victory in their third election as premier. Term limits may also advantage the governing party by preventing opposition members from accruing legislative experience and gaining public notice. Gary Doer lost three elections as opposition leader before becoming one of the most popular premiers in Manitoba's history. Sometimes experience is precisely what voters are interested in. Sometimes tired governments need replacing. A democracy entails voters deciding whether to prefer longevity to fresh perspectives.

Although our history has been marred by restrictions on women, aboriginal peoples, and some minorities from voting and seeking office, the right to elect and be elected, are now fully protected by section 3 of the Charter of Rights and Freedoms. "Every citizen of Canada has the right to vote in an election of members of … a legislature assembly," the Constitution reads, "and to be qualified for membership therein."

To date, courts have mostly focused on the first aspect of the Charter's "democratic rights" – the right to vote. A handful of cases, however, have made clear that the right to run for office is equally as important to our democratic foundations. As Supreme Court Justice Frank Iacobucci explained in a 2003 decision: "The right to run for office provides each citizen with the opportunity to present certain ideas and opinions to the electorate … the right to vote provides each citizen with the opportunity to express support for the ideas and opinions that a particular candidate endorses." "The fundamental purpose of s. 3," he concluded "is to promote and protect the right of each citizen to play a meaningful role in the political life of the country. Absent such a right, ours would not be a true democracy."

Mr. Prentice defends his plan as necessary to promote "turnover in the political process." Whatever the merits of that goal, it certainly is not sufficient to justify infringing the clear wording and underlying intent of the Charter. Of course, the right to run, like other Charter rights and freedoms, is subject to reasonable limits demonstrably justified in a free and democratic society. In Alberta, provincial laws currently restrict Senators, members of the House of Commons, and inmates from standing for election to the provincial legislature. Those types of limited restrictions – which speak directly to the legitimacy and functioning of the assembly – have been upheld as reasonable. Blanket term limits, by contrast, would broadly deny the right to run for office on the basis of an arbitrary time threshold of, at best, debatable value. Enacted as law, the Prentice proposal could not survive constitutional scrutiny.

In a much earlier constitutional case from Alberta, Chief Justice Lyman Duff reminded that democratic governments "derive their efficacy from the free public discussion of affairs … from the freest and fullest analysis and examination from every point of view." The "right of free public discussion of public affairs," he held, is "the breath of life for parliamentary institutions." To sustain that breath of life, our legislatures must be the products of free elections in all senses of the word. As for Mr. Prentice's concern about renewal in politics, Canadian electors have tended to exhibit remarkable wisdom in knowing when a candidate's time has passed. 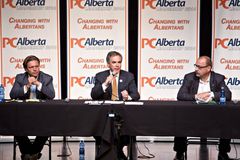 Alberta Tory leadership candidates polite but cool in one of final forums before vote
August 22, 2014
Follow us on Twitter @globedebate Opens in a new window
Report an error
Due to technical reasons, we have temporarily removed commenting from our articles. We hope to have this fixed soon. Thank you for your patience. If you are looking to give feedback on our new site, please send it along to feedback@globeandmail.com. If you want to write a letter to the editor, please forward to letters@globeandmail.com.
Comments