Controversial U.S. blogger Daryush Valizadeh, who goes by the name Roosh V, is intent on bringing his self-styled world tour to Toronto, and lots of folks are justifiably unhappy. Promoting himself as a "pickup artist" Roosh V, among other things, advocates legalizing rape on private property. So why not prosecute Roosh V under Canada's hate-speech law? It's a straightforward question with a not-so-simple answer.

Does at least some of what Roosh V says qualify as hate speech? Yes. Promoting the legalization of rape on private property is, to paraphrase the Criminal Code, willfully promoting hatred against an identifiable group, namely women. That much is obvious.

Less obvious, perhaps, is that the same proposition is also hateful to men. Because the conception of men that his pro-rape ranting implicitly endorses is that rape is an inherent and legitimate part of male sexuality that is being wrongly curtailed. Reducing men as a group to such a crude caricature is so profoundly demeaning that it qualifies as hate speech.

So why not prosecute? Three considerations give us pause.

First, there is the structural disincentive. Prosecuting hate speech is a response of last resort. We place a high value on freedom of speech and do not want governments intruding lightly, particularly when the consequences may mean going to jail. So our law has wisely built in limits. Such crimes should always be thoroughly investigated, and no prosecution can proceed unless the provincial attorney-general authorizes it. These structural limitations mean that one-off hate-mongers like Roosh V, who pop up then slink away in a day or two, will be long gone before any considered decision to prosecute can be made. This is as it should be. Deliberative prudence in prosecuting hate speech is more important than nabbing every cowardly crank.

Second, there is the false martyr problem. Being prosecuted can give a hate-monger free publicity, because such prosecutions inevitably attract loads of attention. Paradoxically, therefore, prosecution can enhance the distribution of the hateful message. And because prosecutions are slow, the message resonates for months, perhaps years, when it might otherwise have vanished without a trace. Furthermore, there are many people in Canada who advocate for greater freedom of expression. This segment of the intelligentsia will invariably come out in support of the hate-monger on principle, not because they endorse his message, but because they endorse his right to deliver it. So, prosecution of hate speech runs a considerable risk of backfiring: promoting and implicitly legitimizing the very views it was meant to defy.

Third, there is often truth to the cliché that the best antidote to hate speech is more speech that denounces the hate not through the force of state intervention, but through the force of enlightened reason. Defying the hate-monger with the very tools he uses, exposing his offensive, propagandistic assumptions and deceptions, can be a powerful antidote to hate speech. Social media, wisely deployed, can enhance our collective power to burst the bubble of hate-mongers. Boycotts can catch fire with devastating speed, the hate-monger's enablers can be dissuaded from enabling, and the messages can be transformed into teachable moments on the virtues of the counterarguments.

The catch is that countering bad speech with good has traction only if people care enough to actually respond. A passive, disengaged populace is fertilizer to the hate-monger's mushrooms. Speaking out against hate is a social responsibility associated with a truly vibrant freedom of expression that is all too often overlooked. It is hard work to rise up and speak against things that are just plain wrong, and too many of us are content to leave that hard work to someone else.

There are at least three reasons why it is not a good idea to prosecute malevolent gadflies like Roosh V. But there is every reason for all of us to take on his hateful propaganda with the tools we all have at our disposal: our discerning intellects and our expressive capacities. We maintain and deserve a vibrant freedom of expression to the extent that we exercise it. 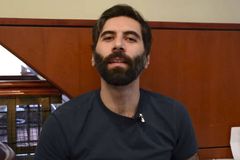