"Time is running out."

Imagine a world where bacterial infections kill children by the tens of thousands, where surgery is highly risky and often deadly because of postsurgical infections, and where chemotherapy is useless and transplants impossible because patients' would be ravaged by pathogens.

It's the world that existed prior to 1928, when Alexander Fleming discovered penicillin.

We're racing back to the preantibiotic age because microbes, from Mycobacterium tuberculosis through to Staphylococcus aureus, are developing resistance to the drugs we have and there is nothing much new in the pipeline.

It's difficult to overstate how grave the problem is, in medical, social or political terms. To give you a sense: Britain has declared antimicrobial resistance to be a threat to the country's security and economy on par with terrorism and climate change.

"It's like climate change in that we're doing it to ourselves. We could restrain the problem, but we're just watching it happen," Dame Sally said.

If we're going to do more than watch some of the most powerful medicines in history grow impotent, we need to understand the source of the problem – "it's happening because we abuse antibiotics," Dame Sally said.

That abuse takes many forms. Antibiotics are overprescribed. They're given when they're not needed: for coughs, colds and earaches caused by viruses. (To be clear, antibiotics kill bacteria, not viruses or other pathogens.)

But it's simplistic and wrong to blame doctors alone. We don't have good, rapid diagnostics, so determining if an infection is bacterial or viral is often guesswork.

Even when antibiotics are prescribed appropriately, they're often taken improperly. When people start feeling better, they tend to stop taking the drugs, and that allows bugs to mutate and grow resistant.

The key is getting the right antibiotic for the bug at the right time at the right dose. (This is where the genomics angle comes in: A cheap, rapid test could revolutionize how drugs are prescribed.)

But prescribing is just part of the challenge. Globally, about 75 per cent of antibiotics are consumed by farmed animals – chickens, cows, pigs, fish and so on. The drugs are pumped into animals to make them bigger, fatter and more profitable. It's also cheaper to buy antibiotics than to invest in better hygiene for them – at least in the short term.

As a result, "our food chain is loaded with antibiotics," Dame Sally said. So are our waterways, because we pee out the drugs.

That constant exposure to antibiotics also fuels resistance, and as a result, we're seeing the emergence of all manner of superbugs – bacteria that don't respond to available antibiotics.

These mutations have been going on forever. Dr. Fleming worried about them almost immediately after he discovered penicillin.

We always had a technological solution: Newer, stronger antibiotics. But the last new class was developed in 1987. "We've always been able to open the cupboard and take out new antibiotics. Today, the cupboard is bare," Dame Sally said.

Moreover, "the market system is broken," she said. Financial incentives for developing new drugs are nonexistent – antibiotics are cheap and, even if a new drug was developed, clinicians would use it sparingly to maintain its effectiveness.

Britain has appointed a blue-ribbon panel, led by renowned economist Jim O'Neill, to study the economic issues around microbial resistance.

The theoretical threat that public health officials have been have been warning about for years is now tangible. Antimicrobial resistance causes an estimated 25,000 deaths a year in Europe, and 23,000 in the United States. (Good data for Canada do not exist.) In Southeast Asia, a child dies every five minutes for lack of effective antibiotics.

Some of these deaths could be prevented with better hygiene. But soap, water and disinfectants are not substitutes for treatment.

"The problem is so serious that it threatens the achievements of modern medicine," the World Health Organization stated earlier this year in a global surveillance report on antimicrobial resistance. "A postantibiotic era – in which common infections and minor injuries can kill – [is] a very real possibility for the 21st century."

Time is running out indeed.

Health Canada restricts use of antibiotics for growth in livestock
July 11, 2014 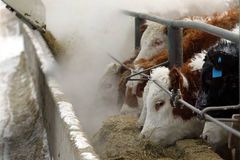