There's a stash of love letters somewhere in my basement. Sometimes I've looked at them when packing up to move, and had to decide what to keep and what to throw away. I've kept a few from the people I liked best. They remind me of what it was like to be young and innocent and starry-eyed.

I feel sorry for kids today. What will they have?

It's too bad no one writes letters any more. And it's no wonder Canada Post is headed for the graveyard. No one needs it. Like record albums, typewriters and buggy whips, it's been done in by changing habits and technology. Instead of writing letters, people text or tweet or e-mail or Skype. They pay their bills online. They send out party invitations by e-vite, and they send out e-greetings at Christmas. The only people who still bother with real Christmas cards are my dentist and my Globe and Mail carrier, unseen but ever-reliable. The last wedding invitation I got was digital.

I can think of only two occasions when handwritten letters are still required – thank-you notes for wedding gifts and condolences to friends who've lost a loved one. But even then, it might depend. A deceased spouse or parent definitely requires a letter, but in the case of a more distant relative, you can probably get away with e-mail. I'm pretty sure people still receive hand-signed letters on important official occasions, like being named to the Order of Canada, but I'm not certain.

Not long ago, the postal service was the crown jewel of public administration, a model of efficiency and innovation. And the post office was one of the most splendid buildings in any town. The postal service was viewed as a vital agent of prosperity and progress – essential to commerce but also to ordinary people, because the only way to communicate across long distances was by letter.

Letter-writing wasn't just a way to keep in touch; it was a central part of the social fabric. It was something every child had to learn to do properly. After Christmases and birthdays, your mom would hover over you and not let you go out to play until you did your thank-yous to the grandparents. At school, you were drilled in the different types and parts of letters until you'd mastered the business and the friendly, the header, the salutation, the complimentary close. Many of us had pen pals, so that we could practise our descriptive skills to inform them about life in Canada while learning interesting facts about other lands.

I doubt many children have pen pals now. I doubt they know the five parts of a friendly letter. They can't even write cursive. But why should they?

When I got older and my friends and I went our various ways, we kept in touch with long, expressive letters that chronicled the details of our emotional and work lives. (Long distance phone calls were still too expensive.) These letters required real thought and time. They were deeply personal. Facebook is a poor substitute.

I have other letters in my basement – fragile family mementoes, creased and stained, passed down through the generations until they got to me. One is a letter from my grandfather, written from France during the First World War, when he was barely 20. He made light of conditions on the front, no doubt to reassure his family. He even made the vermin sound like fun. Another is from a woman whose place in the family tree is lost to history. She wrote it in southern Illinois in 1860, to express her disappointment at the anti-slavery views of her northern relatives.

The human race will no doubt survive without these little chunks of social history. But I'll miss them.

I remember when people looked forward to the mailman because he might be bringing something good – a new issue of Reader's Digest or a letter from far away, written on tissue-thin blue airmail paper with exotic stamps. Today, you can safely ignore your mail for days on end. There's nothing in it but bills, advertising and endless solicitations for money. Most of my mail goes straight from the mailbox to the blue box without ever being opened. The daily mail has gone from a lifeline to a convenience to a nuisance.

But I've changed, too. I don't write letters any more myself. I'm too busy and impatient, and I have acquired a digital attention span. I resent having to use the post for anything, because it's so inconvenient. Say you have to mail a cheque. You need to find the chequebook, an envelope, a pen, the address, a return-address label and a stamp, at least one of which is usually missing. Then you have to put the envelope in your purse and remember to find a mailbox. It's all so last-century. Why can't everyone just use PayPal?

Some day soon, I expect, that mailman (and woman) will go the way of the milkman. We don't need them any more – not when we have UPS, FedEx, even delivery drones. A postal service's unionized pay scales and work rules and expensive pensions mean it simply can't compete. Meantime, the art of communicating with the quaint medium of ink on paper has all but disappeared.

I wonder sometimes what happened to the boys who wrote me those sweet love letters in the basement. Of course, it's easy to find out these days. I Googled one of them last week, and was pleased to discover that for many years he'd run an antiquarian bookstore. There was a picture of him. He looked very nice, if a little old. I wonder if he remembers writing those letters. I hope so. 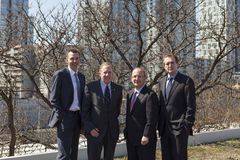