Stephen Harper is a climate hypocrite, and everybody knows it. As Barack Obama launched his bold new climate move this week, Mr. Harper lamely muttered that Canada is already way ahead. This, as everybody knows, is nonsense. Canada has no credible plan to meet the target for greenhouse-gas reductions it agreed to five years ago in Copenhagen. We don't have any plan at all. All we have is the PM's vague assurance that more regulations will be forthcoming, although you shouldn't hold your breath.

I believe that Mr. Harper knows exactly what he's doing. Contrary to widespread speculation, Mr. Obama's move will not turn up the heat on the PM to get more energetic about climate change. As for hypocrisy – well, he's got a lot of company.

Mr. Obama's climate announcement is a big deal. It would steeply cut emissions from coal-fired power plants – the most polluting form of power – and put the U.S. on track to meet its own 2020 Copenhagen commitment.

But there are a few flies in the ointment. Nothing will actually happen for quite a while. There will be a lengthy comment period, then another lengthy period before actual deadlines are set. Each state (some of which are bitterly opposed) will have the latitude to figure out for itself how to implement the cuts. Widespread litigation is a certainty. And the next president could simply cancel the whole deal.

The other problem is that no matter how much he's done about climate change – and it's quite a lot – it will not make a difference. Without a revolutionary breakthrough in technology, global warming cannot be stopped or slowed by any measures short of those that would cause global economic devastation. Some people, such as the liberal journalist Brad Plumer, understand this. Even if these sweeping new rules take effect, he writes on Vox, the reductions will "amount to a roughly 6 per cent cut in overall U.S. greenhouse gases." And the U.S. produces just 17 per cent of worldwide carbon emissions. The total impact will be like chipping an ice cube from an iceberg.

Much is being made of the new leverage this plan will give the U.S. to exercise its moral influence on other big emitters, such as China. All I can say is that if you buy that, I've got a solar-panel-heated bridge to sell you.

Meanwhile, back in Canada, everybody's pummelling away at Mr. Harper for being an environmental scofflaw. "If we do not demonstrate to the world that we as a country are serious about the environment, we will find it harder and harder to export our resources to global markets," Justin Trudeau said in a statement the other day.

So what would he do? Er, not much. The chance that any leader will deliver on our Copenhagen commitment is vanishingly small. That's because, as Luisa Ch. Savage and Andrew Leach explain in Maclean's, it would be way too expensive. The U.S. depends heavily on coal, which is already in steep decline as it's replaced by cleaner natural gas. But Canada depends heavily on oil and gas, which is growing. "Canada would need to impose a higher cost on carbon emissions in order to incentivize the necessary spending by industry or behaviour changes by consumers," they write.

How high might the cost be? They cite analyses saying we would need to impose a national carbon tax of around $100 a tonne – which is around five times more than what has been tried in most of the world. And no one (with the possible exception of Elizabeth May) is contemplating that. For one thing, the impact on the economy and ordinary Canadians would be excruciating. For another, Alberta would secede. For a third, no politician could possibly get elected on such a platform, and none could possibly survive it.

So why did we agree to such an unrealistic target in the first place? I do not know. But it's not the first time. Our Kyoto target was goofy, too. The problem isn't that we keep failing to meet our targets. The problem is that we make promises that are impossible to keep, no matter who's in charge.

Whatever Mr. Harper's beliefs may be about global warming, he knows that carbon taxes can be fatal. They certainly didn't do much for Stéphane Dion's career (as even Liberals can attest). They are causing countless problems for governments in Europe. In Australia, they led to the defeat of the last government.

So, what would Justin do differently? Nothing much. He'd make a few symbolic gestures and pay lip service to targets we will never meet. Nobody is going to sacrifice the oil sands on the altar of environmentalism – especially when, in the larger scheme of things, that sacrifice would be for nothing. 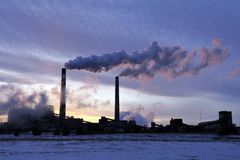