It is a Canadian national sport. Create the appearance of scandal by focusing on the irrelevant.

With the country about to drop bombs in Syria, the best we could do was to ask questions about whether Defence Minister Jason Kenney was accurate in his assertion that only Canada and the United States had air-dropped precision-guided munitions for use in Syria.

Newspapers questioned the Minister's fitness for the portfolio; some television reporters asserted that the lesson to be learned was that ministers should not trust their briefings from the military. The importance we placed on the irrelevant only affirmed how immature we can be at times as a nation.

First, let's get some pesky facts out of the way.

The technology that permits precision-guided weapons is sold by a very few nations, and mostly comes from the United States. Until 2008, no Arab nation was given access to U.S. precision-bombing technology. When the U.S. sought Congressional approval for the sale of laser-guided bombs and GPS-guided JDAM's (Joint Direct Attack Munitions) to Saudi Arabia it confirmed that technology supplied would not be as sophisticated as that supplied to Israel.

Laser bombs fly a bomb to a laser pinpoint. They are accurate but have limitations due to clouds, the ranging ability of the targeting pod – and can only drop one bomb at a time. JDAM's rely on GPS co-ordinates, a stable satellite connection, and the mapping that supports targeting.

The U.S. restricts accuracy signals from its GPS satellites, which mean smart bombs have varying degrees of accuracy. Both systems vary with respect to the bombs they are attached to; the most advanced – so called bunker busting bombs – are not made available to everyone.

As part of the five-eye intelligence community, it can be assumed that Canadian precision munitions will have fewer restrictions and more technical wherewithal than, for example, weapons supplied to the UAE.

Media reports, therefore, were not wholly wrong, but neither was the Minister of Defence; the singular accusation that could be made was the clumsiness in which it was explained.

The entire exchange, which provoked newspaper editorials and commentary on political talk shows, was entirely irrelevant. A television reporter asked Mr. Kenney if there had been collateral damage during airstrikes; when the Minister answered that he did not believe so, he was confronted by a U.S. investigation of a possible America hit on a civilian target. The Minister of National Defence should not be expected to answer for U.S. actions.

In contrast, here are some of the questions put to U.S. Defence Secretary Ashton Carter during his confirmation hearings and subsequent press conferences: If airstrikes alone aren't working, can ISIS be defeated without a ground force? How will sexual assaults be handled in the military; be prevented and at the same time punished? Will only non-lethal assistance be provided to the Ukrainian military or will support be increased? Will Afghanistan be supported in some fashion or has our support ended? He also faced many more questions of gravity, from the affordability of the present military to cyber-security and protection against terrorism.

Those are the kinds of questions that should be asked, and they are not unique to the United States.

Instead, we are wrapped up in the irrelevant and immaterial. As if it truly mattered if one, two or four countries involved in Syria had precision weapons or not.

Canada will be ready to launch strikes in Syria soon, commander says
April 2, 2015 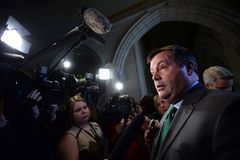