This is the week of the solstice. The days are long, the nights are short. The blessedly wonderful but depressingly short Canadian summer is upon us. It's the time of year for the nicest of reveries.

Yet, reading the news, one would think woe is everywhere upon us. Shootings in Toronto and Edmonton. The euro crises. "Dutch disease." Rancour in Parliament. High debt levels. Slowed economic growth. The Arab Spring as a bad joke – Syria guns down its citizens. Bad news is everywhere, according to the news media.

We in the media are gloomsters by nature. And Canadians, it has been said, are always bitching about something, preferring to complain about the dark rather than see the light. Instead, as the solstice arrives, we might remind ourselves that we are among the happiest people on the planet and that many aspects of our national life are going very well.

There are ways, albeit imperfect ones, of measuring this contentment. The Organization for Economic Co-operation and Development in Paris, for example, has started measuring happiness through what it calls a Better Life Index among its 34 member countries.

One of the questions the OECD asks people in these countries is whether they generally have more positive than negative experiences in an average day – positive being pride in accomplishment, enjoyment of things and people; negative being pain, worry, sadness or boredom.

In Canada, 80 per cent of respondents reported having more positive than negative experiences. The OECD average is 72 per cent. By this standard, the organization concludes, "Canada is one of the happiest countries in the OECD."

Want to guess the happiest country? Denmark. (So much for Shakespeare's gloomy Danes.) And the least happy? Turkey.

That same survey noted that Canada produces the best overall student results in the OECD. So despite the periodic bitching about poor teachers and assertions that the education system is going to rack and ruin, the evidence from testing of students suggests good things are happening within Canadian education. Better education leads to less crime, more income, greater job satisfaction and a more harmonious society.

In another recent OECD survey, compliments were offered about the Canadian university system, both in terms of access and quality. The report also said nice things about research at these institutions, while suggesting that universities that concentrate on teaching and those that focus on research should be better differentiated.

By contrast, the Canadian health-care system ranks somewhere in the middle of the pack for results and patient satisfaction – despite being near the top in spending. Still, 88 per cent of Canadians reported being in good health. (Reporting yourself to be in good health and actually being healthy are sometimes two different things.) And more good news on the health front: The smoking rate is down to 17 per cent from 45 per cent in the 1960s and still headed in the right direction.

Ninety per cent of Canadians in the Better Life Index surveys said they were more or less satisfied with their housing. And, of course, Canada ranks above the OECD average for annual incomes, although income inequalities are growing.

A Canadian would also never know from watching the evening news or listening to the ravings of the "tough on crime" government in Ottawa that the rate of serious crime has been falling for some time and is the lowest in 50 years. According to Statistics Canada, the overwhelming majority of Canadians do not fear physical violence to themselves, a situation that adds to general happiness.

Of course, absorbing the media coverage and buying the message from Ottawa would be enough to make people fearful of even leaving their homes for unhappiness. Fortunately, most people aren't buying media priorities or listening to their political leaders.

With the solstice upon us, Canadians will enjoy the summer. Lucky people in so many ways – and happy too.

Opinion
Science, not politics, should be at the heart of fisheries
April 30, 2018 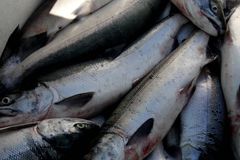