In following the coverage of the News of the World affair offered by other Rupert Murdoch-owned media outlets this week, I was reminded of an Isaac Asimov story, "Runaround," that I read as a child.

In it, a robot named Speedy is sent to obtain a life-sustaining element from a special pool found on Mercury. Speedy vanishes and is discovered later, incoherent and deranged, circling the pool. And that's where News Corporation's media outlets come in.

Speedy's problem, it's revealed, is that two of the Laws of Robotics programmed into him are contradicting one another. One of the laws, the need to protect himself, has locked horns with another law, the one that compels him to perform his mission. It's almost as if he were a news outlet covering its owner during an extremely embarrassing time.

Speedy is driven mad by the dilemma. He starts to sing Gilbert and Sullivan songs, ramble and spout non sequiturs, and he would have made a fine edition to the Wall Street Journal editorial board this week.

In a few short days the WSJ babbled a series of editorials attempting to deflect the fallout from the rapidly escalating News of the World scandal from their parent corporation. Essentially this was their argument: The hacking happened long ago, far away, few were involved and all our "competitor critics" do the same thing anyway. Our recently resigned publisher, Les Hinton, who oversaw News Corp.'s U.K. papers at the time of the alleged hacking, couldn't have known about it, because we like him.

Besides, "The measure that really matters is the market's … and Mr. Hinton was at the helm when we again became America's largest daily." Why, he is the very model of a modern Major-General. And most importantly, Rupert said sorry.

No corporation, they sputtered, can be expected face a criminal probe such as the one ordered ("without so much as a fare-thee-well to the First Amendment") by Attorney General Eric Holder into payments made "to British security or government officials in return for information used in news stories" in a climate in which "U.S. officials have been attempting to extend their enforcement" of foreign-bribery laws to include "a case against a company that paid Haitian customs officials to let its goods pass through its notoriously inefficient docks."

Not that they know much about Britain's notoriously inefficient-at-telling-you-stuff-they-shouldn't-for-free policemen or its politicians, you understand. They were just musing. About Haiti.

The level of misreporting required to present these editorial claims made at various Murdoch shops this week suggests a clever attempt to prove that former News of the World editor Rebekah Brooks was telling the truth at the parliamentary committee into the matter - Murdoch editors really don't know what's going on in their newsrooms.

Maybe this is why Ms. Brooks misused the word "fulsome" at the committee. Everything about her said, "I don't know who worked for me. I didn't follow the budget. I'm not even really an editor."

I almost want to work in a Rebekah Brooks-run newsroom. She made it seem like a happy, relaxed place, overseen by the French Lieutenant's Woman. Ms. Brooks claimed she relied mostly on benevolent "trust" in regards to how her employees came by their information.

(Judging from what former employees have said regarding the levels of stress in those offices, the spit-takes happening across London when she said this must have made it look like the Fountains of Versailles.)

Over at Fox News, another Murdoch enterprise, the days after the murdered-girl hacking story broke, they were still silent on it. This must have pained them - scandal's what they do.

Eventually, amid much indignation about muckrakers, witch hunts, the need to focus on more substantive issues (one such tirade ended with "… coming up next, Casey Anthony!") an op-ed by media consultant Kristi Stone Hamrick appeared on Fox's site, gushing that because Mr. Murdoch's wife, Wendi Deng, had defended her 80-year-old husband, this was, at its heart, a story about traditional family values.

"Though she is a native of China one wonders if there isn't a little Amazon in her blood," the op-ed declared, employing a prose style lifted straight from a Hearst publication, circa 1906. "[She]did what every wife and mother wants to do. … She fought back." I had no idea Amazon women made such excellent wives.

Ms. Stone Hamrick went further, but in keeping with the tone of all this Murdoch-inspired and -sourced insight, perhaps it's better to end with a quote from Speedy, who, from deep within his own conflict, said, "Hot dog, let's play games. You catch me and I catch you; no love can cut our knife in two." 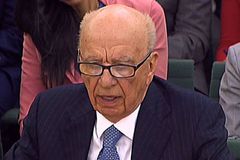 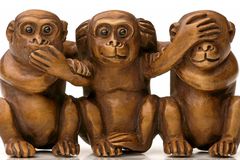 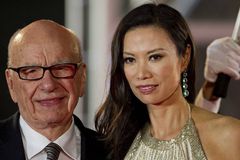