In 1996, the first year that Ontario disclosed public sector salaries, the President and CEO of Ontario Hydro took home $502,853. By 2010, when the province introduced a compensation freeze for non-union, public sector workers, the President and CEO of Hydro One, Ontario Hydro's successor, was earning $975,175. This year's salary disclosure numbers reveal that Ontario Power Generation CEO Tom Mitchell earned more than $1.55-million in 2014.

Some believe that disclosure creates an upward salary spiral. It's the Lake Wobegon effect. Everybody wants to be above average. Employees comb through the salary disclosure lists, comparing their pay to that of their peers, and seeking redress for any perceived inequities. Employers trying to attract above average workers, especially for senior management positions, offer above-average compensation packages, further fueling salary growth.

There is little more than anecdotal evidence to back up this theory. We can't prove that Ontario public sector salaries grew more rapidly after disclosure legislation came into effect. Salaries weren't disclosed before, so it is hard to do a before-and-after comparison.

Moreover, as Azim Essaji of Wilfred Laurier University and Sue Horton of University of Waterloo suggest, there may be good reasons for the silent escalation in administrative salaries. Institutions such as universities might be more difficult to administer than they once were. They're bigger. Fundraising and lobbying have taken on a heightened importance, and programs have proliferated. Because the market for top talent is international, rising executive compensation in the United States and elsewhere puts upwards pressure on Canadian salaries. Perhaps high salaries are simply a reflection of supply and demand – institutions have to pay well to get the best people, but getting the best is worth it.

My gut feeling is that disclosure does raise salaries, especially for senior, mobile employees. In 2000, when most university professors' salaries were below the $100,000 threshold for disclosure, academics working in Ontario earned 4 per cent more than the national average. After a decade and a half of salary disclosure, the average salary for a professor in Ontario is 8 per cent above the average Canada-wide. The increase might be due to other factors, such as the end of a standard retirement age, but salary disclosure is one possible cause.

Should people who are concerned about income inequality and overly high executive salaries push for an end to salary disclosure? No. If it is true that salary disclosure raises salaries, the logical thing to do is to broaden the scope of salary disclosure. Canada could do what Norway does – publish a skatteliste, or tax list, revealing every person's income, and the taxes they paid. Why limit disclosure to public sector employees earning more than $100,000 per year; why not allow low-paid workers, and those in the private sector, to benefit from the upwards wage pressure that disclosure creates?

Universal disclosure might make some people unhappy. One of the world's leading experts on executive compensation, Kevin Murphy, suggests that when people believe they are being underpaid – and, especially, that they are being paid unfairly less than their peers – their productivity is lower, and employee morale falls. Yet this is precisely why salary disclosure has potential to raise wages. Employers who want happy and productive workers have to strive to remedy inequities; to narrow the pay gap between, for example, contract instructors and full-time faculty members.

Did former Ontario premier Mike Harris and his Common Sense Revolution make a fundamental miscalculation when they introduced salary disclosure legislation? If they aimed to control salaries, the answer is yes. They would have been better off doing what the Liberal government has done, and introduce compensation freezes.

Yet by freezing compensation, the Liberal government is attempting to ensure the long-term viability of the public sector. That is precisely what the Harris government was not interested in doing. If providing goods through the public sector is not viable because of excessive salary costs, if people are outraged by high public sector salaries and demand alternatives – well, for people who believe in small government and private provision, that's not a problem.

That's another way of softening the blow of the annual sunshine list: privatization. What people don't know doesn't bother them. 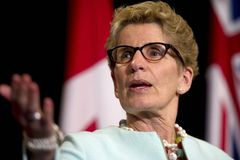 Toronto police 'sunshine list' prompts calls for review of cops' compensation
March 16, 2015
Follow Frances Woolley on Twitter @franceswoolley
Report an error Editorial code of conduct
Due to technical reasons, we have temporarily removed commenting from our articles. We hope to have this fixed soon. Thank you for your patience. If you are looking to give feedback on our new site, please send it along to feedback@globeandmail.com. If you want to write a letter to the editor, please forward to letters@globeandmail.com.
Comments