On Monday, the driver of the van that hit and killed 42-year-old Erica Stark as she was standing on a sidewalk in Scarborough in November, 2014, was convicted of careless driving.

The verdict may have brought some measure of relief to the Stark family but the sentence – a $1000 fine and six months of probation with some driving restrictions attached – begs uncomfortable questions about the court's ability to deliver justice – and to send a sufficiently strong message to the public about the seriousness of the offence.

With 44 pedestrian fatalities to date this year in Toronto (by The Globe's count) – the most in at least 13 years – and five pedestrians struck and killed on Toronto sidewalks last year, these questions need to be addressed.

Read more: Twenty-four pedestrians hit by cars in Toronto in one day

Careless driving – the charge laid against Elizabeth Taylor, the driver of the van – is a violation of the provincial Highway Traffic Act and defined as operating a vehicle "without due care and attention or without reasonable consideration." The maximum penalty is $2,000, imprisonment for six months and a license suspension of two years.

The more serious offence, dangerous driving, is a Criminal Code violation. Unlike with careless driving, the penalty is influenced by the severity of the outcome; dangerous driving causing bodily harm can result in up to 10 years in prison, causing death, up to 14 years. But according to Patrick Brown, a Toronto-based trial lawyer who has handled hundreds of cases involving pedestrians and cyclists who have been killed or critically injured, dangerous driving is very hard to prove in court. "Unless alcohol was involved, or it was a hit and run, most drivers are charged with careless – or lower. I actually think most pedestrian cases get dropped entirely."

Mr. Brown is scathingly critical of the lenience of penalties; he says that Ms. Taylor's $1,000 fine falls at the high end, citing three recent cyclist fatalities he litigated, in which the drivers – all convicted of careless driving or a lesser offence – were fined $700, $600 and $85 respectively.

Drivers charged with careless driving do not have to appear in court. While Ms. Taylor had the courage to do so and sobbed as she listened to the family's victim impact statements, many drivers opt out of this emotional torment, leaving bereaved family members to read their heartbreaking words to a legal agent.

Nor is the driver obliged to provide any statement. Exercising her right to remain silent, Ms. Taylor offered no explanation for what caused her Dodge Caravan to jump the curb, level two steel poles and a traffic control box before sending Ms. Stark into the roadway where she died. Over the course of Ms. Taylor's one-day trial this October, the prosecution ruled out mechanical failure, weather or visibility issues and medical cause. The court was told – based on eyewitness accounts – that Ms. Taylor was not on her cellphone at the time, but her phone records were not submitted. Mr. Brown, who is representing the Stark family in a civil case against Ms. Taylor's insurance company, is going to court on Jan. 6 to force the release of those records from Telus.

Of course, no legal action can right the wrong of such a tragedy; nothing can bring Ms. Stark back to her three young children, husband, parents, sister and friends. But one would hope that the judicial process would at least provide some clarity and that penalties would act as a serious deterrent.

Drivers charged with careless driving should be compelled to show up in court and, if found guilty, to listen to victim impact statements. They should be forced to provide records of any phone on them at the time of the collision. Before sentencing, some plausible explanation for the cause of collision should be found. Penalties should be stiffer and include community service in the area of road safety. And in a dream world, drivers would be able to offer an apology without automatically incriminating themselves.

In his victim impact statement, read in court by his father, Ms. Stark's youngest son, now 8, wrote, "I'm mad at the driver." In a few years, he'll probably be mad at the justice system. Who could blame him? 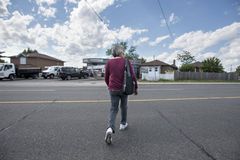