President John F. Kennedy set a goal for the United States in 1961: land a man on the moon and bring him back safely to Earth by the end of the decade. President Barack Obama set a goal in 2008 and again in 2012 to reform the country's health-care system. Mr. Kennedy promised the moon and delivered while Mr. Obama had to apologize in 2013 for flaws in implementing health-care reform.

It begs the question – what is government good at these days? The answer is an important ingredient to sound public policy, arguably the most important one. Yet, political debates and the literature have paid scant attention to it. Political ideology is, of course, an important guide in deciding what government should be doing, but it is of limited value in answering what government is good at.

The dominant political narrative in Anglo-American democracies over the past 30 years has been that government is slow, inefficient and costly while the private sector is dynamic and efficient. The view is now widely held that the way to make an economy more dynamic is to get the government out of the way and let the private sector innovate and compete. Recent public-opinion surveys also reveal a sharp decline in the level of trust citizens have in their governments.

I argue that government is good at establishing the circumstances for economic success but much less so in managing economic success. One can trace all key components of the iPhone, iPod and iPad and the algorithm that led to Google's search engine to a government initiative. The same can be said about the Internet, solar cells and freeze-dried food. A government bureaucrat developed the Shepody potato, which transformed the frozen French fry industry and enabled McCain Foods to dominate the world market.

They are visionary investments and classic public goods in that the investment was designed to advance knowledge with a long-time horizon, making it difficult to appropriate returns, thus the public-good argument. I cannot even begin to imagine that a government department could do what Apple, Google or McCain Foods have been able to accomplish in pursuing new markets, as well as producing and delivering products to consumers.

When it comes to managing operations, the Canadian government has lost ground. Contrary to the private sector and given the centralization of power around the Prime Minister, government managers have learned the art of delegating up rather than down. Too many decisions, including purely management ones, end up with the Prime Minister and his courtiers.

Government is now a big whale that can't swim, that can't keep up with the fast-changing global economy. It has too many management layers, too many oversight bodies and too many public servants generating performance reports that feed a fabricated bottom line that has no footing. The government is now also home to too many conflicting goals and has piled on too many activities on top of one another. In the process, it has lost sight of its core responsibilities, including managing effectively a regulatory regime that not only is able to set standards, but also to make sure that they are respected, as Lac-Mégantic so clearly demonstrated. Notwithstanding high-profile program reviews, the government still relies on across-the-board cuts to control spending.

The courts now have a direct hand in not only shaping government policy, but also in deciding how they should be implemented. Judges are in the enviable position of being able to shape public policy without being concerned about cost or the finer points of program implementation. Politicians and public servants are left to deal with the more difficult and unpopular aspects of public policy: Finding the necessary funding and actually delivering programs and services in a sea of oversight bodies and constraints.

Government operations are also tied to a human-resources approach that is hopelessly past its best-by date. Public-sector unions are inhibiting change at a time when other organizations change or fall behind. Some 75 per cent of public-sector employees in Canada belong to a union compared with only 17 per cent for private-sector employees. Among other things, government managers and unions need to explain why, on average, fewer than 100 employees are dismissed for incompetence every year from a work force of about 260,000 employees in the government of Canada.

Leaving aside the Prime Minister and a handful of advisers, no one is in charge in government. Problems that are of no interest to them or the courts simply roll on through one consultative process after another. The government is truly at a crossroads. It needs to overhaul its approach to shaping policy and delivering programs and services or run the risk of becoming increasingly irrelevant, thus losing the ability to promote visionary investments.

Unless our political and administrative institutions are able to perform at a higher level, voter turnout will continue to decline. How change can be achieved should be a matter of national debate, and a looming election campaign provides such an opportunity. More to the point, if government cannot learn to row better, it will not enjoy the support needed to steer the ship of state and create the necessary circumstances for economic success.

Donald J. Savoie is Canada Research Chair in Public Administration and Governance at the University of Moncton. His forthcoming book is What Is Government Good At? A Canadian Answer. 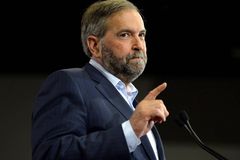 Front-runner Mulcair is now the target of scrutiny
June 30, 2015 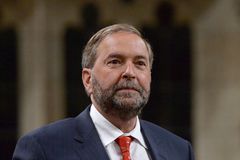