In a culture of sports metaphors – and you are kidding yourself if you do not think that sports is a culture all its own in North America – none of those football allusions remotely captures the position the premier sports league finds itself in today after one of its highest-profile gladiators is revealed to be a brute, or far, far worse.

Indeed, National Football League is under siege after a graphic video showed Baltimore Ravens running back Ray Rice pummeling the woman who later became his wife, and then hauling her nearly lifeless body around heartlessly, brutally, remorselessly, senselessly, horrifyingly.

To apply its own language, the NFL, after further review, has taken the sort of strong action almost every columnist, analyst and amateur observer felt it should have done in the first place, which is to suspend Mr. Rice from the game. League commissioner Roger Goodell, facing his greatest crisis as the civilian face of pro football, had originally suspended Mr. Rice for only two games – a suspension that would have been lifted after Thursday's Ravens game with the Pittsburgh Steelers.

The more stringent penalty came after the emergence Monday of the video on the website TMZ. League officials said they had not seen the video until its release, but that position did not mollify critics inside or outside of football, male or female, fervent fans or casual observers. On Tuesday, the AP reported on a clearer version of the video that appears to show Janay Palmer spitting in the star running back's face. None of this has tamped down concerns about the apparent imbalance of NFL penalties, prompting critiques that the league imposes longer suspensions for drug abuse than for domestic violence – a pattern that only amplifies suspicions about the league's attitudes toward women.

Those who run American professional football say privately that one of the greatest challenges the game faces today – along with the concussion crisis – is the prospect the NFL might become known as an "outlaw league," a phrase that tumbled off the lips of a NFL owner not long ago. The examples of foul play – let's go ahead and call it what it is in more than a few cases: criminal activity – are manifold.

At the heart of this game, which has surpassed the putative American "national pastime" of baseball in fan support, is its brutality, and for decades the mandarins of the game have tried to balance the physicality of football with broader social values. Though professional hockey faces this challenge as well, concerns about the violent aspects of football reached the Oval Office more than a century ago.

In recent years, two books have examined the role Theodore Roosevelt played in softening the violence of college football long before pro football was a factor. TR, as he was known, was no milquetoast; more than a half-century before John F. Kennedy adopted the language of "vigor," Roosevelt spoke fondly and fervently of the manly arts. But he recognized that the game in the first decade of the 20th century was in grave danger.

That's because it posed grave dangers. Harvard president Charles Eliot actually wanted to ban the game. In The Big Scrum, published in 2011, John J. Miller described how Roosevelt pushed for rule changes in a game that featured the dangerous "flying wedge" and that had produced, according to the Chicago Tribune, 18 deaths in the year 1906. As a result, Harvard, Yale and Princeton – the big-time football powers of the day – vowed to minimize the violence.

Mayhem on the field remains part of the challenge the NFL faces today. Many athletes play for four or five years and are left permanently maimed. Some cannot walk. Some suffer from brain injuries.

But the mayhem off the field is another matter entirely, and it is as big a threat to the game – perhaps even bigger.

At the heart of sports is the myth of sports, and the blind eye we turn to its reality – and to burglary and bigotry and so much more. Babe Ruth was a revered hero on the field, but a mess off the field. So, too, Ty Cobb. Pro footballers have been charged with murder, drug offenses, manslaughter, and sexual assault. The list is long, and troubling.

The great novelist and sportswriter Paul Gallico – you know him for The Snow Goose and The Poseidon Adventure – once elegized about "this dizzy, spinning sports reel of athletes, events, records, personalities, drama, and speed, a geared-up, whirling, golden world" of "heroes and heroines, champions and challengers [who] burst upon the scene, shone like exploding star shells, and often vanished as quickly."

He wrote that in 1938, in the first chapter of a book called Farewell to Sport. The danger for professional football is that the Ray Rice moment may represent a farewell to sport for thousands more. Even a league as rich as the NFL cannot afford that. 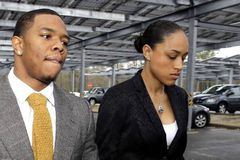 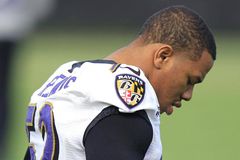