Nik Nanos is The Globe and Mail's pollster, executive chairman of Nanos Research and a Global Fellow at the Woodrow Wilson International Center for Scholars in Washington

Canada should take note of the newest incarnation of the American bully pulpit occupied by President Donald Trump. Back at the turn of the last century, it was Teddy Roosevelt who called the office of the president of the U.S. the bully pulpit. The Teddy Roosevelt version, however, was decidedly progressive, pro-environment and big-business buster. There was a purpose.

The Trump bully pulpit is none of those. His administration is peppered with very wealthy Americans, and his bully pulpit is more about attention-getting and feeding his core supporters than it is driven by ideological purpose.

A recent ABC News survey suggested that a whopping 96 per cent, that is 19 of 20 declared Trump supporters, said they continue to stand by their vote. This should give all pause. To have such a high level of commitment is uncharacteristic in a world where voters are cynical of politicians and much less partisan than in the past.

This environment suggests the emergence of a new reality.

First, the Trump naysayers and media who declared the failure to repeal Obamacare as a setback to the President missed the real point of the new reality.

On policy issues, ranging from building the wall with Mexico through to the repeal of Obamacare and introducing sweeping tax reduction, Mr. Trump is in a no-lose position politically.

If he accomplishes anything, he can claim victory; if blocked or thwarted, it validates his narrative of Washington as a dysfunctional establishment-driven cabal that needs to be shaken up. If he fails to deliver on his promises, he has the political scapegoats of the party establishments (both Democrat and Republican) in Congress, the courts, the liberal media or a combination of all three.

The irony is that what would be considered a political setback for any president under usual circumstances will now become a Trump political proof point to feed his core supporters who believe the system is broken.

He built his real estate empire on a zero-sum game mindset – when he negotiated a lower buying price it was someone else's loss and his gain. His world is more likely driven by a win-lose than a win-win attitude. It's not about co-operation – it is about conflict and trying to exact a Trump gain.

In addition to trying to garner advantage, it also serves the purpose of feeding his core vote. When he says he will give notice of withdrawing from the North American free-trade agreement within days, it puts the Canadian and Mexican governments off-balance and also feeds his core voters by signalling his attempt to deliver on his campaign promise to tear up NAFTA.

What does this mean for Canada?

Canadians should not conflate their personal views of Donald Trump and the hope that his political capital is diminished by setbacks. At this point in his mandate, even with lower-than-usual approval ratings, many of his core voters stand firmly with him. He is the President of the United States and must be dealt with.

The upside is that Canada should not feel special. Almost everyone is a potential target, whether it be Canadian dairy farmers, migrant Mexican workers, establishment Republicans or the liberal media generating what Mr. Trump considers "fake news." Anyone and any country is now fair game.

The upside is that in an environment where any accomplishment or setback is a Trump win-win, he does not need to tear up NAFTA to succeed. If he doesn't get the changes he wants out of NAFTA, he can blame others and still advance his narrative of Washington's dysfunction.

In that respect, perhaps Canada's best strategy is to take the Trump lecture from the bully pulpit and then conduct our business as usual, advance our interests and try to best manage the relationship with the Office of the President.

This would effectively take a page from two former prime ministers – Progressive Conservative Brian Mulroney and Liberal Jean Chrétien. Canada needs to make sure it does not succumb to the "nervous Nellies" (to paraphrase Mr. Chrétien) and, at the same time, politically serenade the new administration, reminding it of the benefits of a cordial, business-like relationship between Canada and the U.S., as Mr. Mulroney effectively did as prime minister.

The irony is that this could very well end up as a win-win for Canada and for the United States. There will be bumps – for sure – but the Trump bully pulpit may not be a calamity. 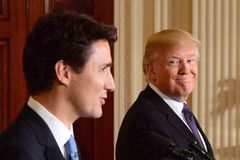 Opinion
Globalism needs a bigger boost than the French election
May 2, 2017
Follow us on Twitter @globedebate Opens in a new window
Report an error Editorial code of conduct
Due to technical reasons, we have temporarily removed commenting from our articles. We hope to have this fixed soon. Thank you for your patience. If you are looking to give feedback on our new site, please send it along to feedback@globeandmail.com. If you want to write a letter to the editor, please forward to letters@globeandmail.com.
Comments