There is something perversely reassuring about the Liberal government's insistence that it will stand by a controversial arms sale to Saudi Arabia despite the kingdom's egregious human-rights record, exemplified by the recent execution of an outspoken Shia cleric. It suggests that Prime Minister Justin Trudeau understands that foreign policy is often more about dark arts than sunny ways.

In foreign policy, the realist dictum goes, countries have neither permanent friends nor enemies, only interests. Canada and Saudi Arabia have almost nothing in common, least of all in the values department. But like its U.S. counterpart, the Canadian government has traditionally seen Saudi Arabia as a stabilizing force in a Middle East constantly under threat from rogue actors.

Yes, the Saudi ruling family enforces a strict form of Wahhabism whose barbarism some have likened to that of the Islamic State, although Saudi Arabia remains a partner in the coalition to eliminate the terrorist organization. Yes, Saudi madrassas are considered breeding grounds for terrorism – such is the hatred toward Shiites and other "heretics" they instill in their students.

But unlike Iran, its arch-enemy, Saudi Arabia has not called for the destruction of the United States or Israel. It has not sought to acquire nuclear weapons to annihilate its neighbours. Unlike Iran, which has been designated as a state sponsor of terrorism by the U.S. State Department, the Saudis have not cozied up to Russia nor sought to prop up Syria's Bashar al-Assad.

Yes, Saudi Arabia's human-rights record is to be denounced. But only China executes more people annually than Iran, while Iran executed more juvenile offenders than any other country in 2014, according to Human Rights Watch.

The world is not always a sunny place and it would be the height of naiveté for any Western government, no matter how high-minded, to argue that by weakening Saudi Arabia, it would somehow be promoting peace and human rights in the region that knows little of either.

This did not stop Trudeau mentor Gerald Butts, now the Prime Minister's principal secretary, from multiplying damning tweets about the $15-billion contract to sell Canadian-built light armoured vehicles to Saudi Arabia when the Conservatives were in power. "Principled foreign policy indeed," he huffed in early 2015, comparing Saudi Arabia to the Islamic State.

The Liberals' public indignation faded as Mr. Trudeau campaigned for votes in Southwestern Ontario, where the LAVs are to be built. At one point, the Liberal Leader euphemistically characterized the contract as a merely a private deal to sell "jeeps."

Yet, his new government's decision to stand by the Saudi deal comes at a moment of rapidly shifting relations in the Middle East, driven by the recent U.S.-led agreement with Iran to suspend its nuclear program. The Saudi regime's insecurity, fed by plunging oil prices and record deficits, and its perceived abandonment by the Obama administration, are causing it to lash out in increasingly desperate ways, as the execution of Sheik Nimr al-Nimr showed.

The more Washington is seen by Saudi Arabia as treating Tehran with favour, the more threatened the Saudi royals will feel. The State Department has held off applying new sanctions against Iran despite the latter's recent provocative move to test ballistic missiles within spitting distance of a U.S. aircraft carrier. And under the recent nuclear agreement, Iran can expect tens of billions of dollars' worth of sanctions relief and the ability to freely sell its oil by midyear.

Tough economic times increase the potential for political dissent within Saudi Arabia, which is being forced to roll back its generous welfare state. The possibility that the regime responds to rising domestic protests with force, while accelerating its proxy wars with Iran in Yemen and beyond, makes it much harder to slough off as mere "jeeps" the sale of LAVs equipped with weapons systems designed to shoot anti-tank missiles, as reported by The Globe's Steven Chase and Daniel Leblanc.

At the very least, these changing conditions require a fuller explanation for standing by the deal than the one Stéphane Dion has provided. "What's done is done," the Foreign Affairs Minister said. "Almost all of our allies are selling weapons to Saudi Arabia. It's part of the world in which we are."

The Saudi regime feels cornered today in a way it did not when the LAV contract was signed, making its future actions more unpredictable. The Liberal government, which is seeking to renew relations with Iran, must show Canadians evidence that these "jeeps" will not be used to run down Saudi civilians. A failure to provide it would speak volumes about the true nature of Mr. Trudeau's foreign policy.

Why are Liberals pretending Ottawa has no say over Saudi arms sale?
January 6, 2016 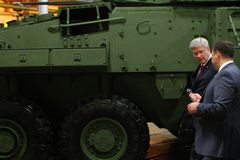