Ibrahim Hindy is an imam at the Dar Al-Tawheed Islamic Centre in Toronto.

The furthest thing from one's mind during the pilgrimage to Mecca is social media. And yet, there I was, performing spiritual rites when a glance at my phone revealed my image had gone viral.

My picture had been attached to an oddball story circulating online about a mosque in Houston called the "Ramashan Mosque" which had refused to help victims of Hurricane Harvey. According to this so-callled news story, the Imam of the Mosque named Aswat Turads – supposedly me! – claimed that Muslims were forbidden from "helping infidels."

For those who speak Arabic, Ramashan and Aswat Turads are completely gibberish terms. Also, if you were following the news, you would know that nearly every mosque in the Houston area opened its doors to victims overnight. Yet that didn't keep the story from being shared thousands of times on Facebook and Twitter, and replicated across a variety of websites.

So, as you can see from my byline, my name is not Aswat Turads. I am an imam in Mississauga, and I've never set foot in Texas.

At first, I thought to just ignore the story and let it blow over. But then I thought about the personal cost this could represent. I thought about how people might forever associate me with this negative story, and how it might hurt me at a personal, professional and social level.

But beyond that, I thought about how so many people had shared this story despite its ridiculous and unfounded claims, its use of gibberish terms, and those who still believed it to be true. Thousands of people shared the story because they wanted to believe the very worst about Muslims, whether fact or fiction.

So I sent a tweet, capturing a photo of the story, and wrote: "That's me in the picture. I've never even been to Texas before."

Before I knew it, my tweet was itself being shared thousands of times. Celebrities like Mark Ruffalo, Kumail Nanjiani and JK Rowling retweeted it. It eclipsed 200,000 retweets and became international news; I was featured on BBC, CBC's The National, Buzzfeed and NowThis.

While I could chalk up the accurate, counternarrative as a Hajj miracle, I think my experience struck a chord with the world because there are many of us who are fed up with the corrosive nature of fake news and misinformation.

Important debates on national security, immigration policy or refugee programs are impossible to have when a significant segment of the population refuses to believe in facts and insists on believing fictional stories propagated on social media.

During the national debate on the number of Syrian refugees Canada would accept back in 2015, I saw people insisting on sharing the same type of fake articles that were written about me. They shared false stories that insisted all Syrian refugees were young, able-bodied men who did not require support or refuge – a claim that is nonsense by every verifiable measure.

But just as people shared the article with my image, despite how nonsensical it was, they continue to share and spread misinformation because it fits into their desired narrative. The website that originated the fake article and used my image, TheLastLineOfDefense.org, issued a curious statement in which they apologized for using my image but not for fabricating the story. They referred to themselves as a satire website, yet their satire disclaimer is hidden in the back pages of their website. Their articles are marketed on social media as being real and the comments on their Facebook page are deeply hateful.

Perhaps the only honest part of their statement was when they acknowledged the profit they make off their fabricated stories. This is essential to understanding the industry of hate and bigotry that is tearing apart society. These websites create fictional stories, often exploiting the fear and hatred that people might have towards Muslims, Blacks, Jews or any marginalized community, and profit off of every click on their website. (Let's not forget intersectionality: One could hold multiple, targeted identities.)

I'm glad I spoke up and I hope that the one thing everyone will take away from my story is that silence is no longer an option. These fake stories have been weaponized against so many communities and create real hurt and division.

My hope is that everyone else speaks up, too; that we take the time to debunk the bogus articles we see circulating on our social media feeds, and muster the courage to correct our family members and friends who might have fallen prey to misinformation. As George Washington said "Truth will ultimately prevail where there is pains taken to bring it to light."

Opinion
As Trump turns his back on journalists, a small but mighty Asian newspaper suffers
September 3, 2017 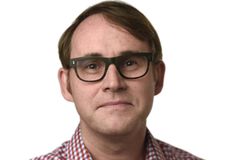