Bob Ramsay is a Toronto communications consultant and founder of RamsayTalks.

The site, size, design, charitable status, funding model and budget aren't the only problems hobbling Ottawa's Memorial to the Victims of Communism.

There's the matter of dignity and taste.

It seems you can send $1,000 to the Tribute to Liberty group and get back not only a tax receipt but your name inscribed forever on the memorial site. If you send $100,000, you can get your name on the actual memorial itself.

This is the epitome of bad taste and of donor recognition trumping good sense.

True, raising money via the promise of immortality has been with us for centuries. Indeed, it makes the charitable world go round. Universities and research institutes wouldn't exist without generous names on their doors, walls, chairs, buildings and programs. Theatres regularly put patrons' names on seats, and in some hospitals you could trip and fall over all the plaques recognizing donors of every size and from every sector.

But Ottawa's communism memorial is none of the above.

Like many memorials, it asks us to remember people who have died for a cause, or in this case, against one.

It's not a war memorial where only the people who fought and died in a particular conflict will find their names. I can't absolutely verify this, but I doubt there's a nation on Earth where anyone can buy their way onto a war memorial, unless they're willing to pay the ultimate price. And if someone ever said: "Let's call this the Canadian Tire Cenotaph," that idea would instantly die, deserving no memorial whatsoever.

This is a commemorative site, remembering millions of people who lived and died under a terrible political regime that has never existed in Canada and is slipping into the ash bin of history.

In 2006, the National Capital Commission, which is in charge of the rules governing monuments and memorials in the Ottawa region, enshrined in formal policy what had been in informal practice not only since the NCC was founded in 1950, but since the city itself became Canada's capital in 1867.

That policy reads: "Donor contributions to the commemoration, whether financial or other, shall not be acknowledged in any manner as part of the commemorative site."

Then last year, two things mysteriously changed. In 2012, the NCC rescinded its policy around acknowledging donations. Then a year later, the NCC was told it no longer had jurisdiction over the memorial. From then on, the Federal Department of Heritage would decide on the appropriateness of pretty much everything about the memorial.

In other words, Ottawa was saying: "If you're rich and committed enough to a cause, you can put your name or anyone else's on the nation's monuments."

When Don Butler of the Ottawa Citizen asked the Heritage Department in February why this was so, their media relations adviser said the changes "were made with international standards in mind and were not driven by the Tribute to Liberty." Pressed to say exactly what this meant, the spokesperson's reply was clearly vetted in advance by the Department of Redundancy Department.

This got me wondering what those international standards are.

Well, in the United States, the Commemorative Works Act, passed by Congress in 1986, specifically forbids this kind of recognition. It states: "Donor contributions to commemorative works shall not be acknowledged in any manner as part of the commemorative work or its site."

That said, if you've been to the Martin Luther King, Jr. Memorial in Washington, D.C., you'll see that there is, indeed, a donor wall. But only if you go into the bookstore, because that's where the donor wall is, across the street from the memorial itself.

But what about memorials that depend on private donors in order to be built? Well, the French government set up a centenary fund, Mission Centenaire 14-18, to commemorate the 100th anniversary of the First World War. One of the biggest projects supported by the fund is the "Ring of Memory." It contains 579,606 names of soldiers from both sides of the battle who were killed in France. They're listed alphabetically and not by nationality. The memorial cost €8-million and not a single donor's name is on the site.

In France, the Canadian-managed Juno Beach Centre does offer donors recognition. But the centre is a museum and not located on the same site as the Bény-sur-Mer Canadian War Cemetery. True, donors can sponsor a brick, inscribed with a name of a veteran or of a sponsor. But the bricks are located on "kiosks" outside the centre.

In Britain, a statue was unveiled just two weeks ago in Parliament Square, London, marking the 100th anniversary of Mahatma Gandhi's return to India to begin the struggle for independence from British rule. More than £1-million was raised from private donors. They are all acknowledged on the campaign's website. None appears on the actual site.

So I have to ask: What are these "international standards" that Ottawa is so eager to embrace?

Perhaps if they looked closer to home, to the 24 existing national monuments and memorials in our National Capital, they would see that not a single one of them allows the names of donors on their sites. Not one.

The idea of a tribute to liberty may be a noble one, but the reward for supporting it is undignified.

Even to those whose families have been brutally wronged by communism?

Yes, especially to them. 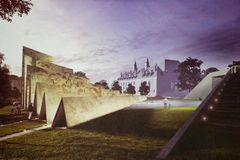