The budget is coming and the news is out that the focus will not be on job-threatening automation, but yet another innovation agenda. The downwardly mobile are unlikely to be thrilled. How many times have the feds laid out supposedly trailblazing innovation schemes – the past four governments have tried them – only to have them fade away?

They haven't worked. The country has never been turned into a leading business or technological innovator. But Liberal strategists are undeterred. They will double down on innovation in this budget. It's to be innovation of a different kind, insiders say. Past measures, such as pouring funding into university science research, haven't brought forward the anticipated trickle-down benefits.

Now the Grits are intent on getting into the business of cherry-picking. They'll identify specific sectors and potential champions and target them for special support. One way will be by spending a large chunk of their procurement budget on them. The plan might be likened, so to speak, to an Own the Podium program for innovators instead of athletes. Economic growth will allegedly follow.

But what about the elephant in the room? The job-ravaging behemoth called automation. Dominic Barton, the head of Justin Trudeau's Advisory Council on Economic Growth, said recently that automation will eliminate no less than 40 per cent of existing Canadian jobs in the coming decade. He's referring to such technologies as self-checkout counters, driverless cars, burger-flipping robots.

These are what Joe Populist cares about. More than any trade agreements, they are the job killers. But strangely the torrid pace of automation is hardly even being debated in Parliament or elsewhere. There's a collective throwing up of the hands. Nothing can be done. Technological determinism is here to stay, earthlings. Deal with it.

There's got to be more focus on automation and robotization, argues Frank Graves, co-author with Graham Lowe of Redesigning Work. "There will be huge carnage and it is going to happen quickly. There are solutions but they will require bold action, not some bromides about innovation."

Bold action will not be forthcoming. Automation will be given short shrift in the budget. The word from insiders is that while the projected scary numbers of job losses have to be taken seriously, "There isn't an appetite to hold back the tide" of technology. There is no pickup, for example, on Microsoft founder Bill Gates's idea of taxing robots that do the work of humans and using the revenues for social needs. There is no enthusiasm for measures such as rewarding retailers who don't switch to self-checkout counters.

Such proposals are readily batted down by the argument that interfering with the advance of technology hinders progress by slowing down productivity. Countries that engage in such practices will become less competitive.

The counter-argument is that we're moving into a new hyper-accelerated phase of automation. Just because it hasn't had a negative impact on jobs in the past doesn't mean it holds true for the future. It's a reason more governments are looking at economic nationalism to protect their workers. It's a reason why globalization appears to be winding down.

The Liberals point out that countries with the highest degree of automation still have the lowest unemployment rates. Mr. Barton and his group see no reason for proactive measures to slow it down. Their automation strategy is reactive. They will address it as a social problem that has a purchasable social solution. They are planning, for example, enhanced programs for people over 50 whose skills are ill-suited for the digital age.

Their plan to move away from trickle-down innovation agendas to a more targeted supporting of winners may well be worth a shot, especially if the winners don't win by reducing jobs.

But it won't, given the failures of past innovation schemes, be an easy sell. Joe Populist is more worried about having his job displaced by innovative technologies than seeing the country becoming more adept at creating new ones. 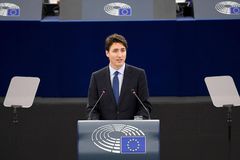 Should I pursue my soon-to-be-automated dream job?
February 20, 2017
Follow us on Twitter @globedebate Opens in a new window
Report an error Editorial code of conduct
Due to technical reasons, we have temporarily removed commenting from our articles. We hope to have this fixed soon. Thank you for your patience. If you are looking to give feedback on our new site, please send it along to feedback@globeandmail.com. If you want to write a letter to the editor, please forward to letters@globeandmail.com.
Comments